A Trip on The Adventuress Schooner

Dick Thies lives on the US West coast and is interested in wooden boats, I discovered him on flickr where he is a member of the Solent Old Gaffers group and has posted some great pictures of traditional boats, many of which were taken at the Port Townsend Wooden Boat Festival and make a welcome change to our familiar local gaffers.
We were delighted to get this account of a voyage Dick made on the schooner Adventuress.
Adventuress is a 133-foot gaff-rigged schooner launched in 1913 in East Boothbay, Maine. She was built as a luxury schooner for John Borden II who promptly sailed her to the tip of South America, through the Straits of Magellan and on up to Arctic waters near Alaska. The goal was to bring back a bowhead whale skeleton for the New York Natural History Museum. They brought back some useful items but no bowhead skeleton. In 1914, Adventuress was sold to San Franciso Bar Pilot’s Association. Her topmasts were removed and modifications were made to make her more suited for use as a pilot vessel, but made her a lot less beautiful. In 1951, she was replaced and then neglected until 1960 when she was brought to Seattle. Eventually she was restored to her former looks and put to work by Sound Experience. They use Adventuress to let folks experience what it was like in the old days of sail and to learn about such sailing and about the natural history and ecology of the Salish Sea (Puget Sound). 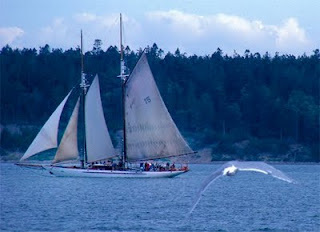 I first discovered Adventuress at Port Townsend’s Wooden Boat Festival. I was overwhelmed by this gaff topsail two-masted schooner with a rig height of 110 ft. and 5,478 sq. ft. of sail. So I took a 2-hr. cruise at the festival that was a great way to see other festival boats on the water. They also let us try our hands at some of the rope handling and coiling. 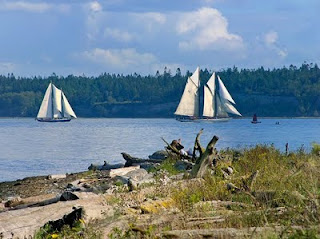 Last summer, I decided to try one of their 4-day trips in the San Juan Islands north of Seattle. The price seemed quite reasonable and they let you know that this was not a fancy-meal and luxury-private-cabin sort of trip. The meals were vegetarian, and I found them very good. Adventuress sailed into a quiet bay each night so it was steady for sleeping. The guests and most of the crew slept on foam bunks that were comfortable enough for me. I don’t think I would have done so well in the hammocks used in the old days. I had not slept in one room with others in fifty years. I discovered that the earplugs they suggested were very helpful. We all had a chance to do some night watch duty, which was very interesting. On mine, we could hear a blowing sound that we guessed was a whale or seal. The sunrise was gorgeous. 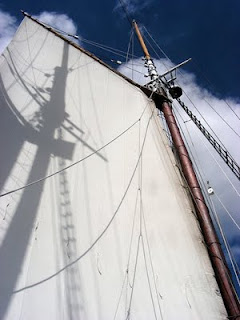 They asked why we came on the trip. I wanted to sing some sea shanties with work being done to the shanty rhythm. They let me take over quite a bit of the shanty man’s role. The first thing I learned is the shanty man sets the pace but he has to watch the work to see what pace is feasible. The Adventuress has a huge mainsail with boom and gaff the size of telephone poles. The gaff is raised with one crew on the head halliard and another crew on the peak halliard. The halliard shanty has to go with the hand-over-hand pulling. I found that the pace has to slow down as the gaff is raised, because it gets heavier as more canvas is raised from the boom. The foresail is much lighter and I had sing much faster to give a good pace for pulling those halliards. 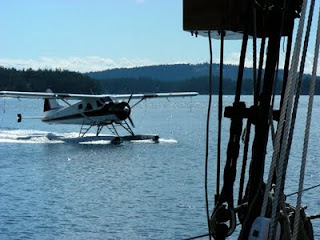 The first two days were sunny, light breeze days so we put up all plain sail (no topsails for this trip due to Coast Guard rules). It was pleasant sailing around San Juan, Stewart, Orchas and Shaw islands. The third day started with light wind, but we were soon going very fast with just a reefed Mainsail and one jib. I think they called it a light gale. It was great fun, but some of us felt a bit queasy after a while. The captain decided to take her into a sheltered bay with the comment “We don’t want to risk this 100 year old schooner”. 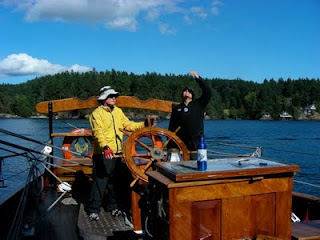 The paying guests were treated like the crew in many ways, except most of us had much less schooner seamanship, so we learned on the job. Some tasks needed to be done by the real crew, but others were done bythe three groupings that each had some real crew mixed with us guests. The groupings were also good for fun things like skits and songs. 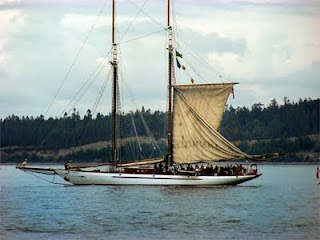 The educational pert of the trip gave us some options on what extra things we might want to learn about. I chose basic navigation and geology of the Salish Sea islands. Both were well presented. The “engineers report” was another way to learn. He kept track of our energy usage (there is some use of the diesel), waste generation (we were better than the teen-agers on the last trip), mpg (quite good since we sailed most of the time). 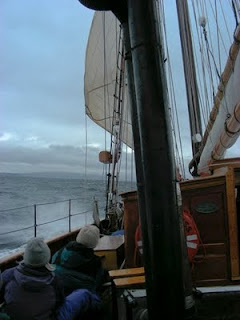 The last day, we took some time to climb the rigging if we so desired. I did not think I cared to do that at age 69, but the captain nicely pointed out that it is all with a safety harness, and it is a special feeling to be up there. So I did the climb up the main ratlines which put me about 56 ft off the deck. I would not like it in a storm, but anchored in a quiet bay it was fine. The folks below looked like wee ants. I felt a bit nervous doing it, but overall it was enjoyable and memorable. 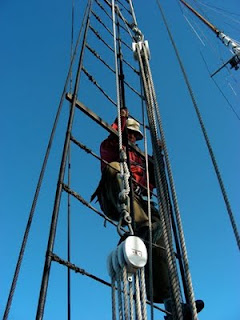 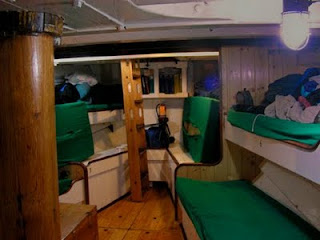 Thanks to Dick for letting us share in a great trip on a fantastic boat.
Posted by Bursledon Blogger at 02:28