An intriguing boat from the post war yachting boom, the Kestrel 22 was designed in 1955 by J Francis Jones at Woodbridg in Suffolk. Jones had been a pupil of Kim Holman and perhaps his situation among the shoal waters of the east coast rivers helped shape the design. It was described as a cruising boat with the responsiveness of a dinghy.

The first Kestrel was built in the same year by Ernie Nunn of Wadringfield in Suffolk at a cost of £375. Originally the hull was of clinker (lap strake) construction which was light weight. Later examples were built in carvel and a glass fibre version was also produced in the late 1960’s.

With a stub keel and lifting centre plate Kestrels can take the ground with a draft of 2’ 4” when the plate is up. The centre plate is contained in the stub keel and together with the mast deck stepped the design takes maximum advantage of interior space for accommodation. 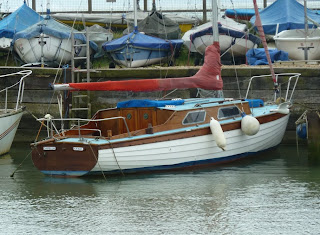 But for all its practical qualities it is the aesthetics of the Kestrel which stands it apart. The clinker construction shows of the fine and modern hull lines, while the sleek and forward sloping windows and low slung coach roof imply 1950's speed and modernity, a style which was also represented by some of the super cars of the day – an early Maserati or perhaps the famous Facel Vega.
Posted by Bursledon Blogger at 03:01