Thanks to Patrick for providing details of what might be one of the most recognisable yachts around.

The oldest star in the Hollywood film version of “Mamma Mia!” was a beautiful yacht, already in her 70s at the time of filming. And it has to be said that, unlike Pierce Brosnan whose singing was questionable, she never put a foot wrong in the part. 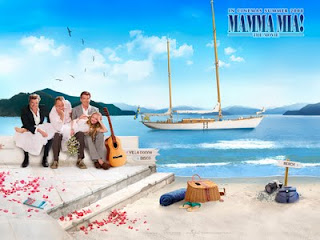 Tai Mo Shan was built in Hong Kong for a group of 5 young Royal Navy officers who had the idea of sailing all the way home to the UK. Her designer H.S. Rouse was the Vice-Commodore of the local sailing club and an enthusiastic amateur naval architect. Only a few yachts are known to have been built to his designs, one of the others being the even more famous “Tzu Hang” in which Miles and Beryl Smeeton sailed around the world.

To save money Tai Mo Shan's first owners economised on a couple of items that would these days be considered indispensable – a motor and a heads. However, they did not stint on quality materials and the Whampoa Dock builders used the finest they could get; teak planking, frames of rare Ipil wood, a yacal keelson, a camphor wood stem, steel floors and a lead keel made her both tough and beautiful. When surveyed many years later she was described as having being built to twice the normal Lloyds yacht scantlings. 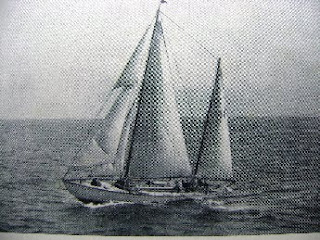 Although keen to save on unnecesary items, naturally these officers wanted to be properly outfitted for a long ocean voyage, and so all of them made sure to take their dinner jackets with them. These turned out to be useful as they were entertained lavishly in many of the ports where they stopped en-route, including in Japan, where, with encouragement of the Admiralty, they attempted to spy on the Japanese navy.

Tai Mo Shan made it back to Britain and has had a succession of caring owners over the past 75 years. Her first owners went on to have distinguished careers, between them winning many wartime medals and honours, including a VC. 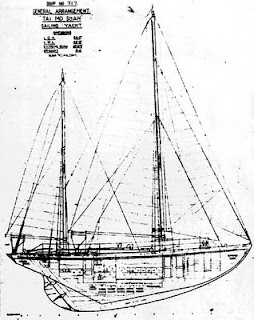 Follow the links below to read much more about this great yacht's history and see lots of interior and exterior photos.

For information on the service careers and later lives of the original owners see http://lintonsview.blogspot.com/2009/11/abba-submarinersand-spying-2.html 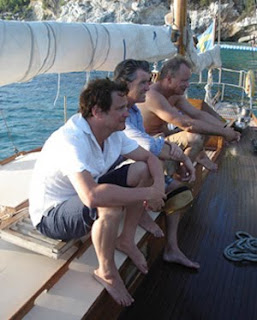