Here’s something very different from Dave Zeiger of TriloBoats which are a family of barge/scow hulls that have been adapted for fast and easy construction in plywood. Dave and his family have what might appear an alternative and enviable lifestyle living aboard their 26 foot Trilo - Slacktide among the islands of Southeast Alaska's Alexander Archipelago. 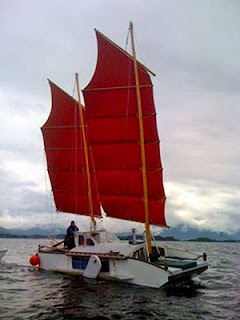 If you think of Dave and family in terms of Ralph Waldo Emerson then perhaps Slacktide is analogous to Walden Pond. At 26' x 7' x 1' Slacktide is engine-free, a junk ketch-rigged sailing barge “not one of those curvaceous barge-babes, either, but a four-square and unrepentant box barge” 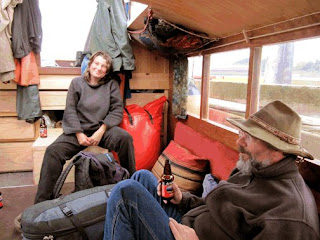 Slacktide is wind and human powered so sailing, sculling, drifting and idling are important pastimes. When the wind is fair and the tide a'rising, she will skim the shorelines or thread tiny passages between islets. When at anchor or waiting on the next tide Dave and family are afforded the perfect location from which to while away the day, drawing (boats from Dave, plants and animals from Anke), making music and exploring realms of the senses.

Compared to many of the boats featured on 1001 Boats “Slacktide” might be described as plain or even odd, but that’s to miss the point and a long history of slab sided working boats such as the sharpie, scow and barge. Reference England’s east coast barge trade, square section barges of 80 to 90 feet carrying immense cargos of up to 100 tons under sail through the shoal rivers and right into the port of London, often crewed by just a skipper and mate speak of an efficiency and fitness for purpose. In her way Slacktide draws many parallels, her form is a direct consequence of her intended function and owners purpose. 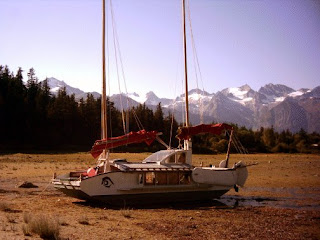 That’s not to say that Dave’s aesthetic is constrained by straight lines functionality, as he comments on his blog,

“.. don't get me wrong! I love curvaceous beauties, gleaming golden in every lissom line! The glint of brass and stalwart patina of bronze. Makes my heart go pit-a-pat!”

If I had a magic wand… sweet and curvy would suit me just fine. She'd be cold-moulded and dynel sheathed. Copper plated, from the boot-stripe down in strips hand-spilled and hammer fit by masters. She'd be tricked out with bronze hardware and copper running lights. Teak decks and resin plus gel-coat in lieu of paint. For easy maintenance, you know. A custom, welded stove would warm her, reminiscent of the old Shipmates, right down to the embossed anchors on the face.”

But I think of our box barges as the Least Common Denominator in boats. They are, quite literally, the least possible effort you can expend and still have a capable cruiser. KISS, even by barge standards. By almost any performance criterion, it's uphill from there. They are the lowest of the low. The bottom of the barrel.

But that's kind of empowering, don't you think? Look at how well they do... look at all the fun you can have on one! Their virtue is that their bang-for-the-buck ratio is through the roof. If any dreamboat is in reach, it's this kind, and it just gets better. And they do have sort of work-a-day good looks to them... don't they? Anyone?”

The answer to which is “yes they do.” 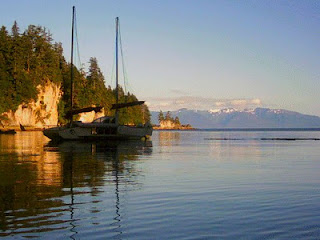 For further proof point of Slacktide’s fitness for purpose we should perhaps look at Dave’s previous boats. The first was a 19 foot Phil Bolger built Micro called Zoon, despite her small size the family proved to themselves that such a sailboat, even a small one “might be a good place to live.”

Zoon was followed by Luna, described as 31foot and “Bolgeresque” a slightly larger interpretation of Phil Boger’s Advanced Sharpie AS29. 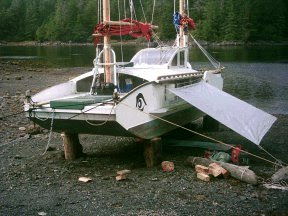 With Luna sold and lessons learned, Dave and family used their unique experience when they embarked on the design and build of Slacktide, as the next generation vessel which incorporates several features ranging from unusual to outright experimental. 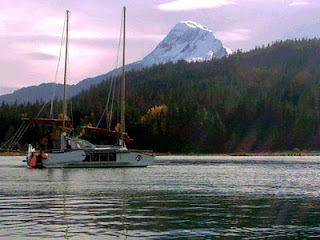 Sea trials were aimed to answer questions about the viability of the following:

Slacktide is a box barge – while there are several examples of sailing box barges, few if any sail as general cruisers in anywhere near the range of conditions found in SE Alaska, in particular, could she make good in moderate gale conditions?

The bottom is a trampoline structure, there are no internal stiffeners over the large and dead flat cabin sole (the inside of the hull). It's designed to flex. As a result the copper bottom plates were glued, not fastened to avoid barnacle-like nail-heads

The large, side-windows are little more than a foot above the waterline.

The low foredeck is just over two feet above the waterline in order to maximize the forward windows and allow good steering visibility from a sitting position, inside the cabin.

Her centre boards are arranged on cable travellers to allow them to stow aft providing a clear and unrestricted view while at anchor.

The mizzen mast is off-center – displaced over one foot to port.

A SeaCycle ® Drive Unit has been fitted for windless propulsion – this is like an outboard, but with rotary pedals (like a bicyle's) in place of the motor 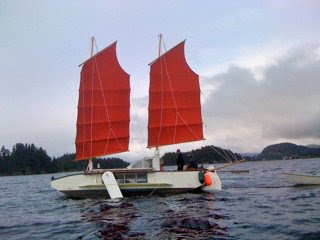 SLACKTIDE was intended for year-round, live-aboard cruising, since Dave and family have been living continuously aboard now, through two and a half seasons sailing about 428 nautical miles, they have had good opportunity to test her suitability. Details of those extended sea trials are available on their web site, in the sense that Slacktide is a boat that gets you where you want to be, the photos suggest that she does the job well 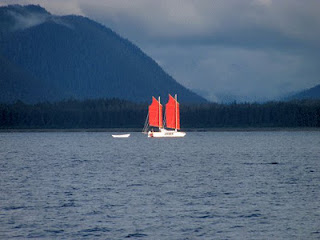