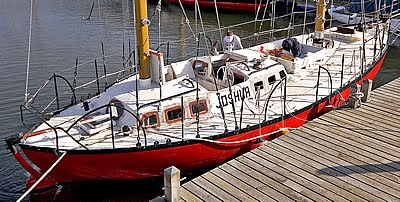 Bernard Moitessier will always be remembered as the strange Frenchman who might have beaten Robin Knox-Johnston to be the first man to sail singlehanded non-stop around the world. Instead, on the last leg of his journey, when heading North in the South Atlantic towards the finish, he put the helm over and headed back into the roaring forties on a second lap of the globe.
At the time, in March 1968, he had been closing rapidly on Knox-Johnston, who was sailing a much slower boat but had started ten weeks before Moitessier.
Moitessier's powerful 39' ketch "Joshua" - named in honour of the first solo circumnavigator, Captain Joshua Slocum - was built in steel in France in 1962 to a design by Jean Knocker. Her immensely strong double-ended hull, welded, with minimum framing, in thick gauge steel plate, is clearly heavily influenced by Colin Archer's famously seaworthy norwegian yacht and lifeboat designs. By coincidence, Knox-Johnston's 32' "Suhaili" was also based on a Colin Archer design. 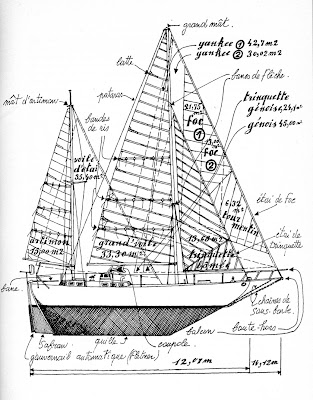 Joshua was not built specifically for the Sunday Times Golden Globe Challenge, the competition won by Knox-Johnston for the first non-stop solo circumnavigation. She was conceived and built, however, with shorthanded long ocean voyages in mind. Moitessier had already made a number of ocean crossings in home-built boats of his own design. As both his previous oceanic adventures had ended in shipwreck, he was no doubt keen to make sure that Joshua would be built as strongly as possible. Her construction was financed by the royalties from the book he wrote about his previous voyages, and by the time of the Golden Globe race, Moitessier had already tested her thoroughly, in ocean voyages from France to the Caribbean, through the Panama Canal, across the Pacific to Tahiti, and back to France by way of Cape Horn.
After these voyages Moitessier wrote another book and many magazine articles about his experiences. 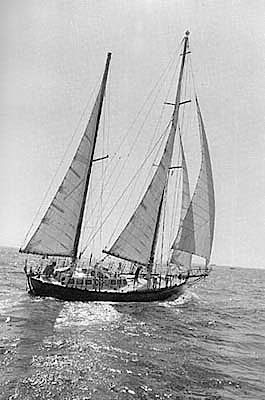 Although he became renowned as France's most intrepid ocean voyager, and financially comfortable as an author, Bernard Moitessier was a quiet man, never comfortable with his celebrity. It seems it was the anticipation of the public and press hullabaloo that would result if, or more likely, when he won, that persuaded him to abandon the race and continue sailing, just at the moment when victory began to look probable.

"I am continuing, without stopping, towards the islands of the Pacific," he wrote, "because I am happy at sea, and also, perhaps, so that I don't lose my soul". He sailed on as far as Tahiti, then spent many years living and sailing in the South Pacific, earning his living writing about his voyages.
Joshua became another of Moitessier's shipwrecks, when, ten years after his famous one-and-a-half times round-the-world solo voyage, he accidentally piled her up on the shore in Mexico. This strange man then gave the boat away to a couple of young men who helped to recover her. Later she was purchased and restored by the Maritime Museum of La Rochelle, where she remains afloat and active to this day.
Moitessier died in 1994 and is buried in Brittany.
Images: Wikipaedia
Links to more information about Joshua and Bernard Moitessier:
La Mer en Livres
Bluemoment.com
Posted by Patrick Hay at 19:16