Patrick Hay a regular reader wrote reminding us of the Folkboat, clearly a yacht we were not going to miss off 1001 Boats

Patrick writes - "Love the 1001 Boats site and have a look almost every day to see if there's anything new.

One of the first keelboats I sailed was a Folkboat, and if it hadn't been such a great boat I might have stayed a dinghy sailor all my life. This boat has surely earned a top place in the 1001 boats list. 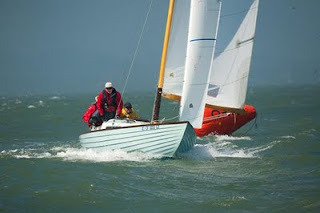 Maybe you could use this piece in praise of one of my all-time favourites. I have no photos of my own, but I found these excellent pics on the Nederlands Folkboot Club site." 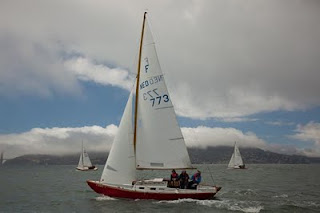 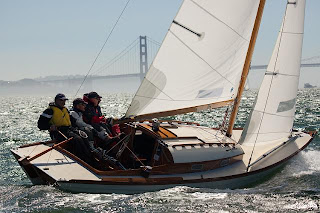 I don't know if it's just me but that last one looks like it may be sailing past the Golden Gate Bridge, whatever the case our thanks to Nederlands Folkboot Club for the use of their great photo's.

Patrick -
"Back in the '60s I used to crew aboard an early Folkboat sailing around the Irish Sea. It was one of the original, pretty, Scandinavian clinker-built boats, with cramped accommodation, low headroom and no heads. There were two settee berths in the saloon, and a pipe cot under the foredeck that was a tight squeeze for an adult. An outboard motor was sometimes used to get us into difficult harbours, but more often than not we couldn't be bothered, as it was dreadfully hard work to mount and start it, and it was appallingly unreliable, anyway.

It was a delightful boat to sail in any weather. The long tiller remained light and the helm responsive however hard the conditions, and the boat could stand up to her sail well. The Folkboat's ability to take strong winds and rough weather in it's stride has made it one of the great boats of our time, with many epic ocean voyages and thousands of victories in both offshore and coastal races.

A strange fact about the Folkboat. The design originated as a result of a competition to create an affordable one-design weekend cruiser/racer – but nobody won the prize!

Instead, naval architect Tord Sunden was asked by the Swedish Yachting Federation to amalgamate elements from 2 of the best design entries, together with some of the committee's own ideas, to create the type of boat they really wanted. As a result Tord Sunden's name goes down in history and everyone has forgotten the designers whose boats didn't quite fill the bill.

The first Folkboat was built in 1942 during World War II – which makes the “People's” boat almost an exact contemporary of the Volkswagen “People's” car, and though the two concepts came from very different political and social cultures they have a great deal in common – affordable, reliable, and simple yet offering good performance. Although the boat's design is now almost 70 years old, it is so beautiful it will never date, and an old pitch-pine planked clinker Folkboat can still compete with much more modern boats, especially if kept up to date with modern spars, sails and rigging. Of course, there are also official GRP Folkboats but these are made from moulds that comply exactly with the original design.

Over the years there have been many different versions of the original boat, some calling themselves “Folkboats” even though not complying fully with the one-design rules, and others, though clearly Folkboat based, going under other names. Some very successful boats, such as the Contessa 26 and the Stella class have been developed by designers who tweaked the classic Folkboat shape, but nobody has bettered the original package – which is why there are literally thousands of them sailing all over the world."
Indeed there are Patrick and more than a few here in the Solent, but having searched the hard disk, I too am short of Folkboat pictures so I went out on Sunday and snapped a couple of local boats.

This first one is in fact a Marieholm Folkboat, an updated version of the original by designer Tord Sundén for fiberglass construction which first appeared in Europe durng 1969. 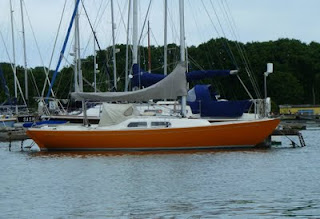 This one however is all wood, varnished and beautifully maintained and being a Folkboat she's going to sail as well as she looks. 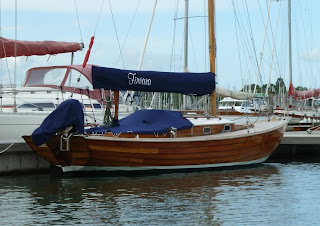