The Solent Scow dates back to around Edwardian times, the story goes that local Lymington sailor Captain Nicholson found that his west country built pram dinghy wasn't suited to the choppy conditions of the Solent and around 1912 asked local boat builder Dan Bran to build what is in effect a sharp nosed pram dinghy.
The boat gained popularity in the 1920's and 30's becoming known as the Scow with clubs racing the boats in nearby Yarmouth, Beaulieu and further a field Hamble and Portsmouth each fleet with minor variations.
Several builders offered the Scow including the Berthon Yard in Lymington which built hundreds. 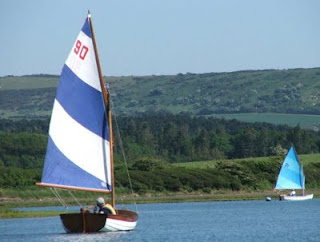 During the 1950's Scows were still being raced and used as yacht tenders, but as clinker boat building became less cost effective the design was revived in GRP.
Up until 1985 the Scow was used for junior racing in Lymington, but by that time the moulds weren't up to scratch, so local builder John Claridge was asked to build a revised Scow making it a better all around dinghy for racing and training. 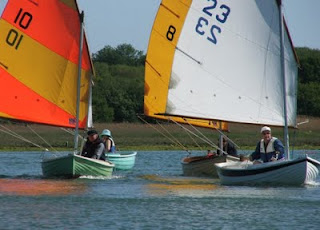 The Scow today is also built by Flight Marine and there are fleets at boths end of the Solent sailing from Chichester, Bembride, Yarmouth, Lymington and Keyhaven.
Pictures here are the Yarmouth fleet sailing on the upper reaches of the River Yar on the Isle of Wight. 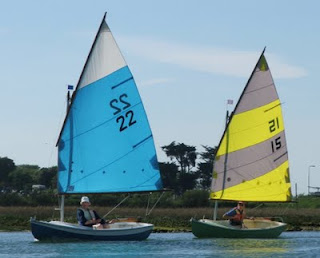