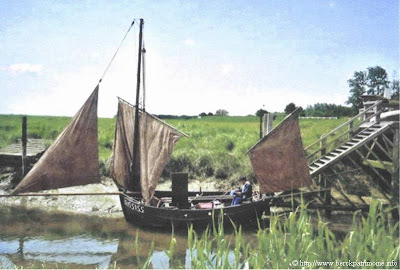 Marianne Toute Seule is an open, inshore fishing boat of a type which is typical to the Cote d'Opale, the long sandy coast of the Pas De Calais region of France. These hand-lining boats are known as “flobarts”. A flobart is a shallow draft boat designed for beach launching. Thanks to the Marianne Toute Seule's flat bottom and lifting daggerboard she could be easily sailed up onto the beach at Berck and left to dry out on the tide, an essential feature, as, like other seaside settlements on the Cote d'Opale, the town has no harbour.

Modern versions of the traditional flobart design can still be seen in these parts, even though few boats are now launched and landed from the beach in this way, and, of course, the modern versions are now usually built in GRP. The design has been adapted, too, to suit propulsion by modern reliable diesel motors, so it is only tradition, and not the need for sails, oars, daggerboards and rowing benches that now dictates the look of the region's open inshore fishing vessels.

As the old sailing flobarts were rapidly disappearing, the town of Berck decided in 1992 to rebuild this old "flobart Berckois" (boats varied slightly in design from one town to another) and to make her available for demonstration cruises and for use as a symbol of the town's maritime history and tradition. That same year the restored Marianne Toute Seule was awarded first prize in the “French Coastal Boats” division at the Brest International Festival of the Sea. 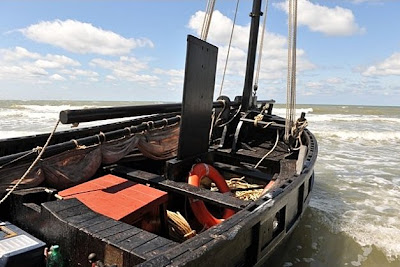 Marianne Toute Seule is clinker built with elm planking traditionally fastened with clenched nails. Although only 5.70m on deck, her long bowsprit and bumpkin enable her to carry an impressive 40m² cloud of sail, divided between her standing lug main and mizzen sails, and the jib flown from her long bowsprit. The bowsprit and bumpkin can be withdrawn and stowed inside the boat when not in use.

Alternative propulsion was by 4 oars which were poked through ports in her topsides – but Marianne does now have a diesel!

Marianne Toute Seule has recently returned from another major refurbishment, and can normally be seen at her berth at the tiny port of La Madelon, near Berck, on the River Authie estuary. From here she makes a number of demonstration outings during the months of May June, July and August each year, taking groups of up to 8 tourists, students, birdwatchers or wildlife enthusiasts out into the Authie Bay for a close-up view of the birdlife, seal colonies and shifting sandbanks. 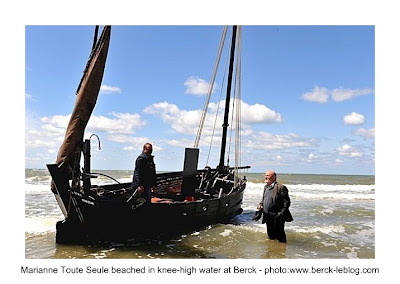 The boat's curious name comes from a famous character in 19th century Berck, who was instrumental in the town's development as a centre for medical treatment and convalescence. In the 1850's a grieving widow, Marianne, offered sick children a chance of a seaside cure in the fishing port of Berck. Her husband, a local doctor, and 4 children had died in a cholera epidemic, hence the soubriquet “Toute Seule” ("Marianne all alone"). Soon it was noticed that children sent to Berck seemed to recover more quickly - especially those with bone diseases like rickets.

Encouraged by the results, doctors began to prescribe the sea air and sea-bathing of Berck for all sorts of other sickness and disability. In 1869, Napoleon III's wife, Empress Eugénie, opened the big Maritime Hospital which is still a landmark on the Berck seafront. Other medical institutes followed, and the town expanded from 2,000 inhabitants to 11,600 by 1911. It had trams, a theatre, running water, electricity and telephones - all the facilities of a thriving seaside resort.