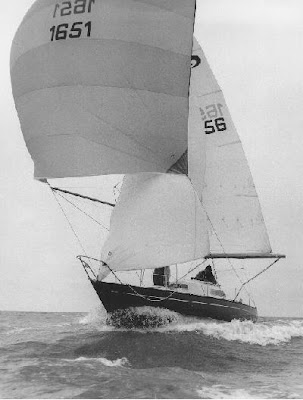 In 1967 Jean-Marie Finot, who had recently married, decided to give up the idea of becoming a yacht designer so that he could concentrate on earning a reasonable living. As he is now one of the top half-dozen yacht designers in the world, this was very nearly the biggest mistake of his life.

As a sailing instructor at the Iles de Glénan school - “the only place in France you could really learn to sail, at the time” according to Finot - he got to know Philippe Harlé, the chief instructor, who was leaving to set up a yacht design practice. Jean-Marie, too. wanted to learn about yacht design, so he took a lowly position as Harlé 's assistant in order to pick up some experience.

The apprentice Finot did actually design a couple of boats for the Harlé practice, but as a recently married man he wanted a career that would support a family, so he gave up his yacht design ambitions and left Harlé . However, as a favour to a friend, he agreed to design one last boat, Ecume De Mer, a small cruiser/racer of which it was intended only two would ever be built – one for the friend and one for Jean-Marie himself. This would be, he decided, his last design.

The pair looked around for a French yard to build the hard-chine plywood boats, but none seemed interested. Finally a Dutch builder, Walter Huisman, heard of their project and, impressed by the young designer, offered to build one boat at a reasonable price, provided they would campaign it in a number of races, including the International Quarter Ton Cup competition. Although this entailed modifying the plans to create a slightly larger boat, agreement was reached. 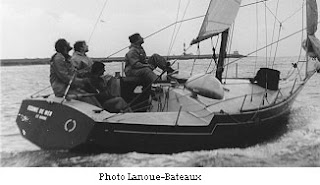 In the Spring of 1968 Huisman delivered a bare painted hull. Finot and his friend went to Holland, and spent some time fitting her out with deck gear and rigging, before launching just in time to enter, as agreed, the Quarter Ton Cup. (photo: Huisman prototype Ecume De Mer in hard chine plywood) With such a lack of preparation and tuning they couldn't hope to win there, but later, with a fully sorted boat, they won the important Delta Race. Their success attracted an Australian, Eric Bradley, who took home modified designs for the boat with slightly reduced freeboard and a coachroof, retaining however the plywood hard chine hull. Several were built in Australia to this specification.

The following season, back in France the prototype boat won race after race, and even returned briefly to Holland to win the Delta race again. Soon this phenomenon caught the attention of the French boatbuilder, Mallard, who contracted to build a series of boats to the design, in GRP. Once again the drawings were modified. Away went the chines to be replaced by a rounded hull shape. The stepped sheerline and flush deck were replaced by a conventional sheer and a short coachroof. Though the efficient racing deck layout was retained, with halyards and controls led aft to the cockpit, on the inside the accomodation was re-designed for comfort in harbour rather than racing. There would now be standing headroom, a dinette, a toilet, and a separate forecabin. 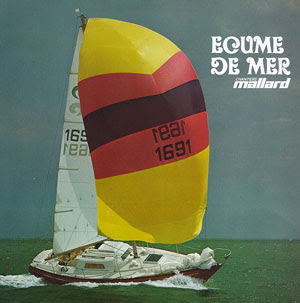 The production Ecume De Mer (colour photo from Mallard 1969 brochure) was a sales success from the start and remained in production, unchanged until 1975 . A 100% standard production boat won the Quarter Ton Cup in 1970 against strong international competition, and a modified, but nevertheless series-produced regatta version with a flush deck won again in 1972. Hundreds of owners had countless successes in offshore and club racing, while hundreds more enjoyed family cruising in a robust and capable boat.

Further modifications were made to re-style accommodation and coachroof, giving more headroom in the heads in 1975. This version won the 1977 Boat of the Year title and was chosen for the 1978 "Tour De France" race. It continued in production until 1980.

Eventually 1385 boats were built to the Ecume De Mer design. Examples of this fine boat, that was supposed to be Finot's farewell to yacht design and of which there should only ever have been two, can still be seen in almost any marina in France as well as in many other parts of the world. This great boat - that launched a lasting career for its designer - has itself lasted pretty well. 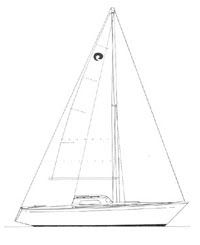 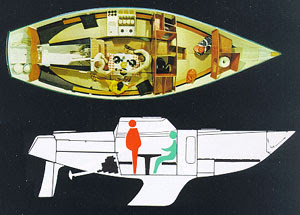