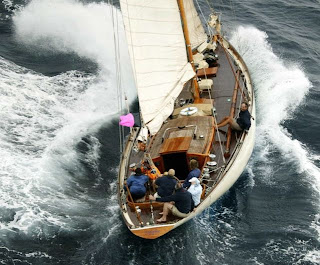 André Mauric was the most prolific and best known of France's 20th century yacht designers. His career started in the 1920s with radical designs for racing yachts to the International Metre Rule in the days when the bermudan rig was still considered new-fangled and fragile, and carried on well into the 1980s when, among other winners he designed the the highly successful Atlantic crossing record breaker Kriter VIII. In between he designed dozens of great boats, including Pen Duick VI for Eric Tabarly, the 1972 Half Ton Cup winner Impensable, the popular and successful First 30, and Sylphe, a classic yacht hidden for 5 years underwater.

Sylphe (originally Ariel) was commissioned by Paul Blanchet, an owner who wanted a yacht to win races under the British RORC rating rule. His timing was not good – it was 1939 when Mauric started designing the boat, and she was still unfinished on the slipway at Chantier Pharo, her builders in Marseille, when the Germans invaded France. In the days of uncertainty and chaos after France's surrender, believing that the Germans would steal the yacht's ballast keel – a 13 ton lead casting (imagine the price of that today!) - Mauric ordered the yard to sink the unfinished hull in a deep part of the harbour.

So it was that Sylphe spent 5 years in hiding under water before she was even launched. Many of the Marseilles shipyard and dock workers knew the secret, but no-one breathed a word, and Sylphe remained safely concealed with all her ballast until the war was over. 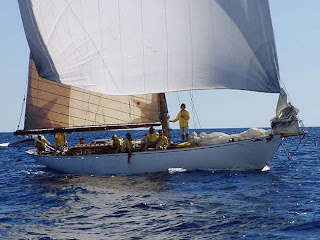 After the war Sylphe was recovered and completed. Her long submersion had done no harm – indeed it may have further improved the seasoning of her timbers and made them less liable to distort, crack, or split in later age. She was finally launched in 1947, and though Mauric had designed her with one of his trademark tall bermudan cutter rigs supported on a slender mast, her sailplan was modified in 1953 to give her a larger and taller foretriangle, its foot extended by a short bowsprit. These modifications were no doubt intended to keep her competitive with the latest offshore racing boats which, encouraged by the allowances in the old RORC rating rule, had begun to sport big overlapping genoas and high aspect mainsails.

During the next 50 years or so Sylphe was sailed and raced in the Mediterranean. It seems she was well maintained, with Mauric himself advising on a number of alterations and small repairs. Her original mast was replaced with a new hollow wood mast in the 1980s, and an engine was fitted at some time (she had been designed and launched without one). The teak deck was also renewed during this period. So when she came up for sale in the south of France in 1999 her new owners found her to be in reasonably good structural order, but scruffy, dated, and in need of a lot of attention. 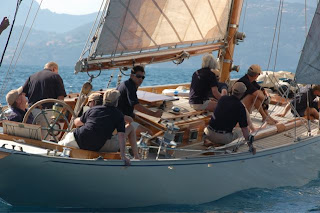 Her new Dutch owners sailed her to Turkey and set about a 7-month total overhaul to make her more suitable for Mediterranean charter use. Although the interior had mostly to be stripped out and rebuilt to provide more comfortable charter accommodation, the original hull timbers and planking, having endured such a long submersion so many years ago, were found to be in excellent order. Only a couple of rot-infected frames had to be replaced. Her owners are proud to claim that Sylphe still has none of the steel bracing and reinforcement that many other yachts of her day now need to keep them in sailing order. They are equally proud that she retains her original mast winches and her unique, custom made, cockpit sheet winches.

Now equipped with all the modern trappings of a top-quality charter yacht, including satnav, full B&G sailing instrumentation, water-maker, autopilot, etc., Sylphe is currently believed to be available for charter in the Mediterranean. She is also occasionally to be seen taking part in classic yacht regattas at St Tropez, Cannes, and at other glamorous yacht harbours.