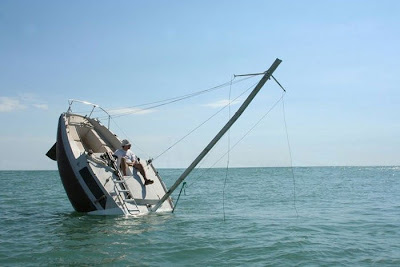 French artist Julien Berthier created this boat. According to him, "Love love is the permanent and mobile image of a wrecked ship that has become a functional and safe leisure object".

I'm not sure the Health and Safety Executive would agree with him about the last part.

Here's what the gallery that displayed it said.

"For this piece he adapted an abandoned 6.5 meter yacht so that it appears to be perpetually sinking. To create this, the vessel was split and a new keel was constructed allowing it to be sailed by Berthier at a 45 degree angle off the coast of Normandy. Love-Love, like much of his oeuvre, is impressive, poetic and humorous. 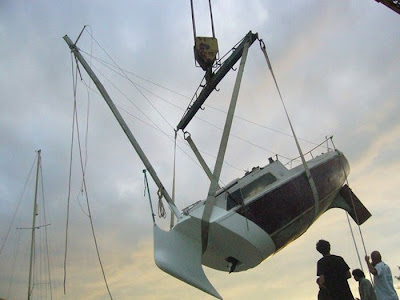 In this project, the artist invests his energies and resources into creating an art of fiasco, aiming in his words to “fix an object at the moment of its deregulation.” The image, and metaphor of the sinking ship is an iconic one – it signifies death, lost hope and sinking dreams. Berthier’s Love-Love freezes those sentiments permanently both celebrating and overturning them. On display in the gallery will be the boat itself as well as a series of accompanying photographs and documentary video showing the performance in Normandy."

Mr Berthier knows something most of us don't, though - how to make money out of old boats. He is reported to have sold this one for £50,000.