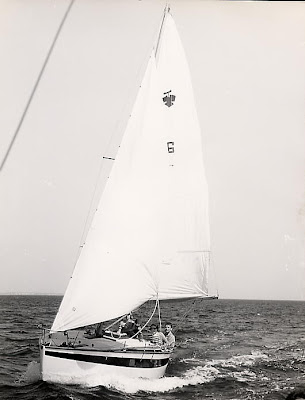 Philipe Harlé's Muscadet is a French legend. In the early 1960s the Muscadet helped “democratise” the sport of sailing, making ownership of a real coastal cruiser affordable for the ordinary working man. There were, of course, other designs, many from the drawing board of J-J Herbulot, that were as affordable and as capable, but it is the Muscadet, with its instantly recognizable profile, its startlingly good offshore performance, its sheer numbers and its longevity that must take the honours as the real French “peoples' boat”.

What is most surprising about the boxy little Muscadet is that, as well as being a capable and roomy small family cruiser, it turned out to be an exceptional mini ocean racer. Its outstanding successes in this field could be compared to a VW Beetle winning the Monaco Grand Prix and the 24 Heures Du Mans. (Yes, I know about Herbie, but that was Disney comedy, the Muscadet is a real life champion!). 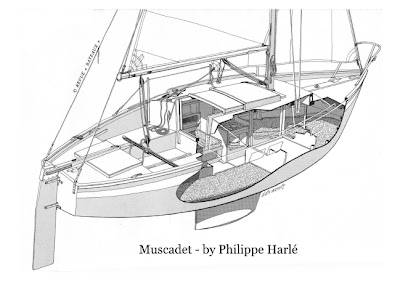 To start at the beginning, Philippe Harlé was working at the Glénans Sailing School where he was in charge of boat maintenance. A new motor supply shuttle was needed for the cash-strapped, island-based school, so Harlé designed it and oversaw its construction himself. Naturally he was then the obvious choice to manage the construction of the school's new offshore training yacht, Glénan, designed by the great John Illingworth.

These two projects provided Harlé with such fulfillment and excitement, that he recognised his future lay in yacht design. At the end of the proving voyages of Glénan, trials which involved taking part very successfully in a couple of RORC races (9th and 2nd places – in spite of the boat starting its first race two hours late, its fit-out still unfinished, and the boat so underprovisioned the crew all lost 7 or 8 pounds in weight), Harlé bumped into Louis Blouet, a businessman and enthusiastic offshore racer. Blouet mentioned that he was about to commission Illingworth to design a new ocean racer, and the young Philippe impulsively offered to design the boat himself. Blouet, rather surprisingly, agreed. This was 1962 and Philippe Harlé was now a naval architect! 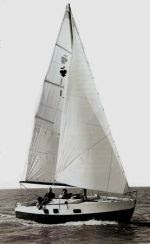 In spite of this encouragement, Philippe was still working at the Glenans when the prototype of his next design, the Muscadet, was launched at the Aubin yard in Nantes during February 1963. Built in plywood with a single hard edged chine, its reverse sheer and high slabby topsides unrelieved by ports or other features, she must have looked unusual to say the least. Claude Harlé, Philippe's wife, thought it ugly, and taking a tin of anchovies from her larder as a template, she traced three oblong porthole openings on the Muscadet plans. With these windows and a broad contrast stripe painted under the sheerline, the Muscadet's looks were marginally improved, and the boat sailed, with little further preparation, across the Bay of Biscay from Nantes in heavy weather, to take part in a One-Of-A-Kind Rally organised by a yachting magazine at La Rochelle. 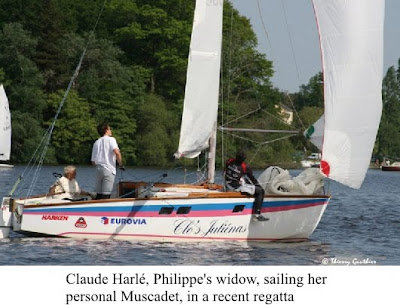 The crews of the competing yachts may have laughed at the little "soap box” as they called the Muscadet, but they stopped laughing when she outsailed bigger and much more expensive boats and left them all with a good view of her most boxy feature – her almost square transom. That year two further Muscadets sailed to the Glénans, where they were trialled by many of the staff and trainees and excellent reviews were published in the Glénans journal. Muscadet's performance both on and off the wind, especially in a choppy sea, was judged outstanding, and her fine seakeeping and sailing qualities, together with her low cost, soon led to a very full order book for the builders, Aubin, and to Philippe giving up his job and setting up shop as a Naval Architect in his Paris apartment.

You have to like a man who names most of his work after alcoholic drinks. Philippe Harlé started this sequence in 1963 with the Muscadet. By the time of his untimely death in 1991, more than 50 of his designs were named in this fashion, including Armagnac, Cognac, Scotch, Aquavit, Gros Plant, Cabernet, Sancerre, Pineau, Sauvignon and Sangria. 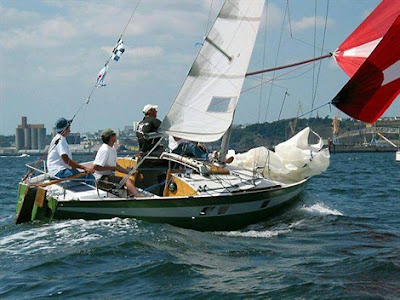 At any time in the 1960s or 70s, a yachtsman visiting France would have noticed the proliferation of the Muscadet class. it was taken up by individuals and clubs all over France, and its amazing ability to make fast passages in rough water, often with 4, or even more, on board (the French love to sail in company) impressed the crews of larger, more traditional British cruising yachts who would find Muscadets turning up in the Channel Isles, the Scillies, the English south coast ports, and even the south-west of Ireland.

The combination of good performance and low initial cost was unstoppable. Young people could afford to buy boats that were equally as capable of winning races and of making offshore passages as the larger boats that had hitherto been thought the minimum requirement. In 1977 when already around 750 Muscadets were afloat, the first Mini-Transat singlehanded race for yachts of 6.5 metres overall length was announced. This race, though conceived and organised in Britain, attracted a large number of young French entrants, and 6 out of the 26 starters were sailing Muscadets, even though the design was already 14 years old.

5 Muscadets finished the gruelling race from Penzance to Antigua in the West Indies. The first 3 of them finished 4th, 6th and 11th. The last of them was in 16th place. Muscadets were still well represented in the 1979 race in which Philippe Harlé himself came fourth, sailing a Gros Plant, a slightly modified and modernised version of the Muscadet design. Another Gros Plant finished 2nd, while the lowest placed Muscadet was in 17th place out of 32 starters. 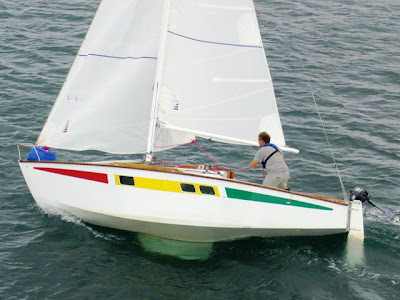 Although the Muscadet continued to prove its ability in offshore races throughout the 1980s (there was at least one Muscadet in every Mini-Transat up until 1991), the new generation of Mini 6.50 offshore racers, including designs by Harlé, eventually made it uncompetitive. However, the class remains, to this day, highly popular in French waters as a family cruiser and one-design regatta racer.

The strict one-design class rules include two unusual stipulations. First, the crew must be good company and willing to take part in parties and social events organised by the regatta committee. Second, the boat must have at least one full bottle of Muscadet on board at the start of the race, and one full bottle on crossing the finish line.

", by Claude Harlé and Dominique Lebrun.
Posted by Patrick Hay at 11:55