Maïca and her sisters - a classic Illingworth design 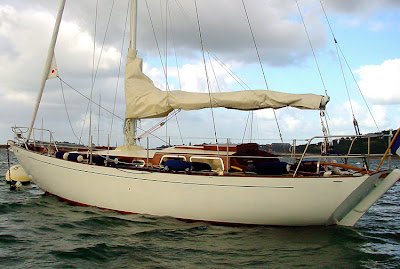 There are not many ocean racing characters whose exploits and achievements rival those of Captain John Illingworth. He was already a well-known and successful yacht racer before the war, but it was in the 1940s and '50s that he virtually dominated the British ocean racing scene, as well as being hugely influential in the development of the sport in other countries, especially France and Australia. (photo: Mandragore, a transom stern Maïca class)

His most famous yacht, Myth of Malham, was nominally designed by Laurent Giles, but it is no secret that Illingworth himself conceived the general outline of the boat, with its abruptly short ends, relatively light displacement and, above all, its groundbreaking rig with big masthead foretriangle and high aspect ratio mainsail. Jack Laurent Giles begged to be allowed to draw longer overhangs, but was firmly overruled. He complained that the proposed mainsail was too short on the foot and looked more like a flag than a sail, but Illingworth insisted, and Myth of Malham went on to be one of the most successful ocean racing boats of all time.

In 1958 Illingworth opened his own yacht design business, in partnership with Angus Primrose. Together they created some of the most attractive and weatherly boats of the era. Illingworth's role was to conceive the design in general, the rig, and the details of deck and interior layouts, while Primrose gave the hulls their sweet and efficient lines for speed, good seakeeping and beauty. (photo: Saba, a superb example of a counter stern Maïca)
Many of the firm's early clients were French. Illingworth spoke fluent French and loved the country. He encouraged and assisted in the founding of the enormously influential Glenans sailing school, where hundreds of young Frenchmen learned to sail – and to become instructors themselves. He was commissioned to design a yacht for the Glenans school, the building of which was put under the supervision of Philippe Harle who worked at the Glenans at the time. This experience so stimulated Harle that he immediately gave up his job at the school and set up as a yacht designer himself. 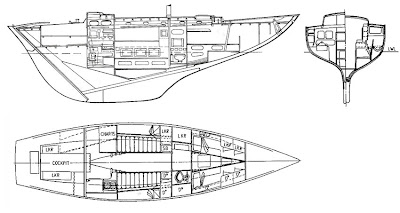 The first of what became known as the Maïca class was commissioned by French yachtsman Henri Rouault who had admired Illingworth's earlier successful racer “Belmore” and asked for a smaller version. She was built by Burnes of Bosham and launched at Easter 1960. At the suggestion of Rouault's sister, a nun, the boat was named after her convent's former Mother Superior, a decorated heroine of the wartime resistance, who was known by the nickname “Maïca”. (image: drawings for the transom stern Maïca)
The original Maïca, like the Belmore design, had a transom stern. She was so admired and so successful, winning the RORC Class III championship in 1962 that soon further examples were built in Britain and in France, but when Illingworth sold the plans for the Maïca to Constructions Mécaniques de Normandie at Cherbourg, Felix Amiot, the owner of the yard, insisted that the design should be modified with a counter stem. Apparently this was because M. Amiot wanted a Maïca for his own personal use and he preferred the elegant look of a counter stern. 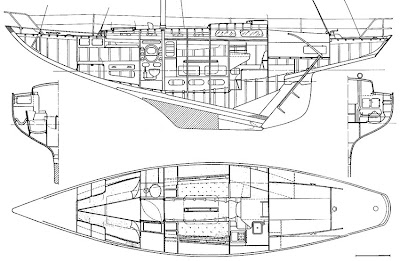 So Illingworth and Primrose produced plans for a “Maïca à voûte” (counter stern) and in 1963 CMN started to build this version employing a novel method of construction that made series production viable - cold moulded mahogany. (image: drawings for the counter stern Maïca class) A first lightweight layer of 1cm planks was laid longitudinally over formers, then two diagonal layers of planks, each 4cm wide, at right angles to each other. When the glue had cured the hull was simply lifted off the formers and turned right way up for decking and fitting out. 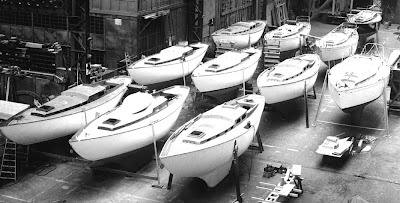 CMN built 38 Maïca class yachts, about half of which are known to be still sailing and in superb condition. (photo: Maïcas awaiting delivery at the CMN yard in Cherbourg) The CMN Maïcas were mostly sold to French clients, (one was ordered by the Greek ambassasor to Paris), but many went to customers from Britain and other countries. Some of these boats were among the most famous offshore racers of their day - and many were scoring notable wins even ten years after the introduction of the class
With so many international racing successes and long voyages, the class also made a name for itself in Mediterranean waters and it was not long before a couple of Italian yards obtained licences to build slightly modified versions. One Italian version, of which I believe over a hundred examples were built, was in GRP with a modified fin keel and skeg underwater profile. 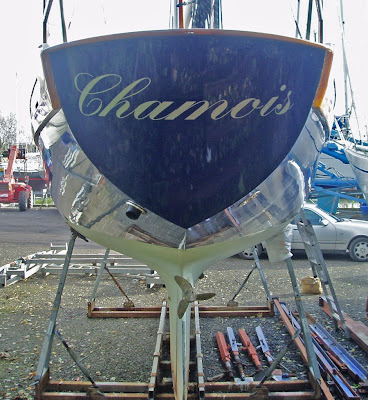 Maïca class by Illingworth and Primrose

(photo: The elegant stern of one of the counter stern Maïcas, recently sold by Sandeman Yacht Co.)

Links:
Class Maïca (Acknowledgements to this French website for much of the history and most of the above photos)
Saba - a French owned Maïca.
If you want to sail a Maïca, see Saba's cruising and regatta programme
Posted by Patrick Hay at 09:34