"A" ~ the spectacular mega yacht designed by Philippe Starck 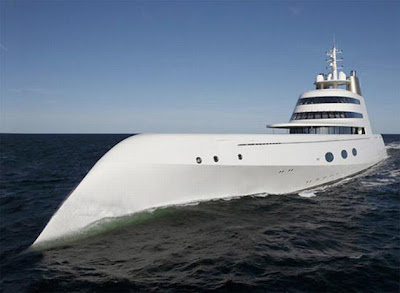 The French designer, Philippe Starck is best known for his furniture and kitchen gadget designs, including his iconic lemon juicer. He is not, as far as I know, a naval architect, yet the most exciting and, to my mind, most beautiful of the world's billionaire mega-yachts has its origin on Starck's drawing board.

Starck, whose work ranges from designing boutique hotels, the Virgin Galactic “spaceport” as well as that stylish juicer, claims to have come up with the idea for “A”, as the yacht is called, in 3½ hours. Naval architects, including Britain’s Martin Francis, and Blohm and Voss, the German shipbuilders, then took over and adapted the design project.

Starck always insists that form must follow function – in other words the purpose for which an object is designed should dictate its shape. This 5,900 ton, 390 ft. yacht's shape is reminiscent of a battleship crossed with a submarine. Evidently Starck appreciated that a yacht is, in essence, a big boy's toy, and that for this big boy, Russian billionaire owner Andrey Melnichenko, 36, only the biggest, “baddest” looking toy battleship on the boating pond would do. 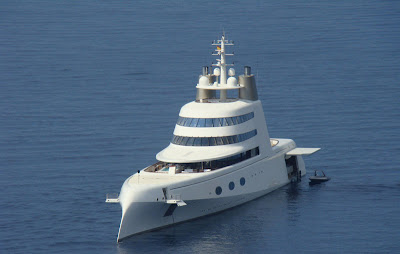 Apart from sheer stylish looks, the clean lines of the exterior answer another function – that of security. The lack of any external features such as rails, handholds, or openings makes it very difficult for pirates or other undesired visitors to board the ship. For the same reason, the helicopter pad on the bow is easily rendered unusable by extending a telescopic mast through the deck. Clamshell doors hide all the access points, including the garage for the 2 launches, extending harbour gangways and even the anchor cable fairleads.

The yachts twin engines deliver 24,000 hp for a 24 knot cruising speed and a 6,500 mile range. Accommodation includes a palatial (quite literally) owners suite, 6 luxurious double guest cabins, and quarters for 37 crew plus 5 of the owners personal staff, secretaries, assistants, etc. 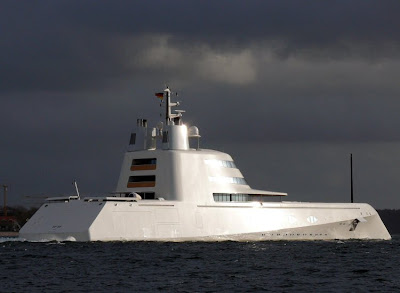 The yacht is variously said to have cost $200 to $300 million. Crew salaries, maintenance and running costs are unlikely to be less than another 5 to 10 million a year. So, it's not enough to be very rich indeed - Wayne Rooney rich, for instance - to own this yacht. You need to be able to spend twice Wayne's annual salary, every year, just to run it. Fortunately for Mr. Melnichenko, whose wealth is conservatively estimated at $2-3 billion, he can. 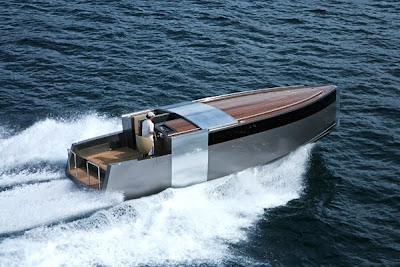 Obviously the interior décor is super palatial. I won't even try to describe it. You can find more details in the Wall Street Journal video and on the sites to which I have linked below. But the accessory I really like, and which makes me warm greatly to the scarily rich Mr. Melnichenko, is the uncompromising design of the yacht's twin 30 ft. motor-launch tenders. He could easily have bought a couple of off-the-shelf plastic speedboats, and in spite of the fact that each one of these beauties probably cost as much as a very nice house in Torremolinos, he clearly would have nothing that was not rare and spectacular for his yacht. This, for Mr Melnichenko was probably no more of an extravagance than my purchase of a pair of shiny bronze rowlocks, instead of perfectly serviceable plain galvanised, for my 10 ft rowing dinghy.

As another great designer once said, “God is in the detail”.