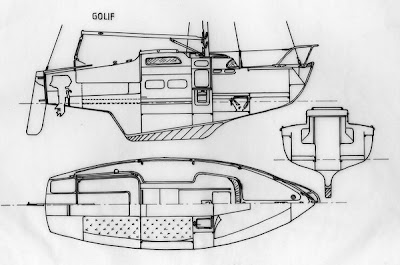 The 23ft Golif was built from 1962 by the Jouët works at Sartrouville. Jouët claim she was the first production small offshore cruiser to be entirely built in GRP, and she caused a stir on her introduction at the first Paris Boatshow in January 1962.

The unusual name comes from a famously ruthless, daring, and reportedly amorous 17th century French pirate, Louis Adhémar Timothée Le Golif, also known as “Borgnefesse”. Since his nickname means something like "one-eyed-arse", you would probably have been wise to address him, at least until you got to know him well, as Captain Golif. 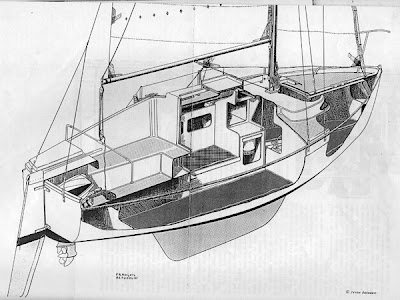 Golif was designed by Jouet with one eye on the American market, where the management believed they could sell a lot of boats. They had probably been helped considerably in their objective by the earlier successful transatlantic voyages of Jean Lacombe, in a plywood Jouet Cap-Horn. Apparently the company's market research suggested that the Americans favoured rather more interior comfort than the European market was used to, and that stiffness under sail and transportability by road would be important qualities for US buyers. Some of the Golif's characteristic features, such as its panoramic cabin window, shoal draft, relatively light displacement and high ballast ratio, stem directly from these market-related requirements. 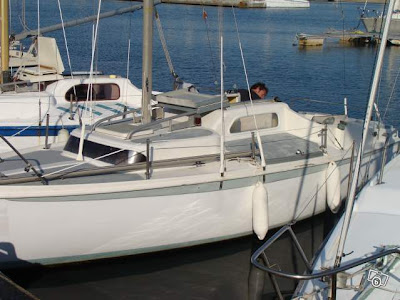 Even today, Golif's looks seem rather quirky, though the underwater hull shape and the rig appear conventional. At the time, however, Golif's rig was considered rather tall and narrow, and the aluminium mast was in those days quite an innovation on a small cruising yacht. The odd pinched shape of the coach roof seems to have been intended to maximise the width of the side decks, but without sacrificing headroom in the places below where you might want to stand. Thus, with perfect French logic, there is low headroom over bunks and seats, where you sit or lie down, but there is plenty of headroom over the central passage and galley area, where you stand or walk. As the Jouët company said, this deck was designed from the inside!

Unusually for such a small boat, Golif had a decent chart table at which you could comfortably sit and work while facing the direction of travel, as you might in a much larger yacht. This was achieved by making the chart table swing down from the cabin deckhead right in the centre of the boat. Another innovation was a hinged and sliding hatch (visible in the colour photo of a Golif recently for sale in France) 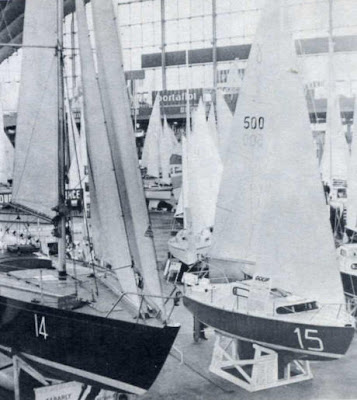 Some versions of the Golif were delivered with an optional deeper keel for racing performance. These boats were excellent performers in offshore races and won many prizes, but it was a perfectly standard Golif that achieved the greatest fame for the class. In 1964, Jean Lacombe who had been France's sole entrant in the 1960 Observer Singlehanded Transatlantic Race (OSTAR), returned to repeat the feat in a Golif, once again the smallest boat in the competition. This was the year of Eric Tabarly's first triumph, so Lacombe's achievement was rather overshadowed by the acclaim and fanfares garnered by the winner. Nevertheless, Lacombe's Golif took joint pride of place, alongside Tabarly's Pen Duick II at the centre of the 1965 Paris Boat show. (see photo)

There are varying estimates of the total number of Golifs built by Jouet and also by the Dubigeon yard in Normandy. The total number certainly comes to over 1000. 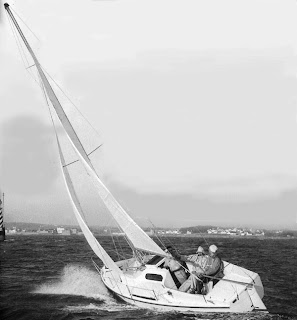 Many thanks to the French Golif owners website for all the b&w images and much of the information used in preparing this post. Colour photo of a Golif recently for sale in France from an advertisement on www.leboncoin.fr

A scanned copy of the original 1963 Jouet Golif sales brochure is available in .pdf format from Yacht Brochures.co.uk