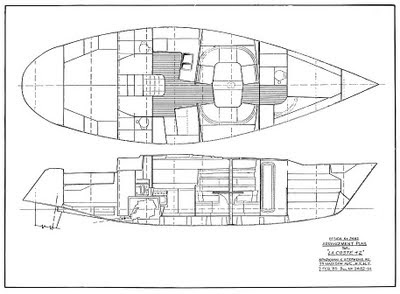 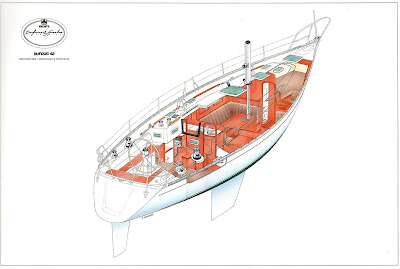 I usually contribute posts about French boats to this blog, but when I heard last week that Sparkman and Stephens, the most illustrious yacht design firm of the 20th century, had moved, after more than 80 years on Madison Avenue, NY, to new premises on the Connecticut shore of Long Island Sound, I thought I would feature an S&S design in this post to mark the historic occasion. Cunningly, though, I managed to find an interesting S&S boat with a very French story.

The fashion brand Lacoste is so well known all over the world that it's easy to forget its French origins. Rene Lacoste was a French tennis champion, winner of 7 grand slam titles in the 1920s and '30s, whose nickname, "the alligator", was the inspiration for the logo on his tennis shirt - the first of many products marketed under the now famous Lacoste name. In 1985, the house of Lacoste, by then a global byword for sporty fashion goods, took the bold step of extending their brand into yachts - not just any yacht, of course - Lacoste yachts were to exemplify style, performance, and comfort, so naturally they went to the world's most respected yacht architects for the designs. 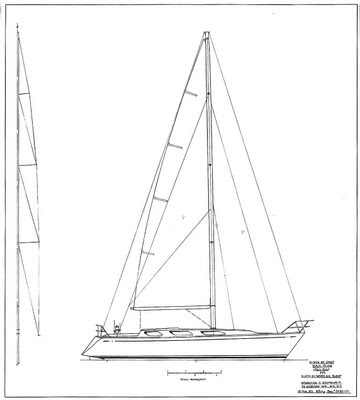 Sparkman and Stephens designed at least two boats for Lacoste. One, a motor yacht, never went into production. Another, the Lacoste 42, a fast cruiser/racer, was built and marketed for Lacoste by the Dufour yard at La Rochelle. Though a very handsome, stylish and capable vessel it was not a great success in sales terms - only 12 were ever built

Looking at the photographs and drawings of the Lacoste 42, I think I can guess why sales were disappointingly slow. The boat suffers from a seriously split personality. On the outside it is a very high performance racing yacht, with a tall, narrow, complicated rig, a race-crew oriented deck layout and an aggressively honed, IOR-rating-tweaked, short fin and vestigial skeg underwater profile; inside it's a de luxe holiday home with 3 double bedrooms, (each with ensuite facilities), a large galley and a spacious and comfortable saloon.

I imagine most of the marina posing types, who could have been attracted to the stylish and comfortable interior, would run a mile from the race-bred rig with its three-spreader mast, running backstays, hydraulically tensioned standing backstay and 2 inner forestays (one is detachable to ease tacking - the two guys on the foredeck in the publicity shot below are leaning against it). 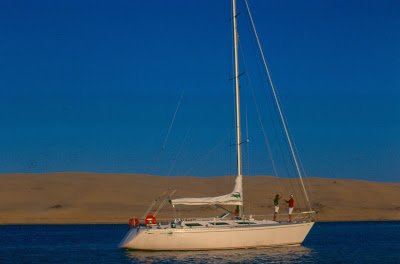 Conversely, few of the hard-core racing crews capable of handling the big rig with its huge headsails and spinnakers would be likely to appreciate all the comforts of the double beds and triplicated shower and heads compartments.

Aside from that, the marketing and management suits at Lacoste probably knew little about the unglamorous wet, cold and bruising side of yacht racing, and the salt-stained welly-boot boat jockeys at Dufour equally little about fashion marketing - in short, a perfect recipe for a marketing flop. None were built after 1992, even though the Lacoste name was dropped and the yacht was rebranded as the Dufour 42.

A pity, really, because according to the accounts of owners and crews that you can find on internet forums, the Lacoste 42 made an excellent, long-legged cruising yacht. Even now, it seems that when they do come on the market they tend to sell for very good prices. 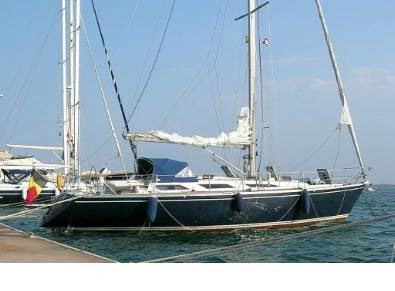 Plans and drawings: Sparkman and Stephens