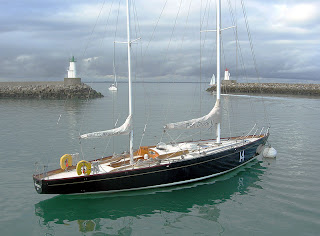 Back in the early 1960s France was still recovering from a war which had left many of its cities in ruins, its businesses broke and its economy on the rocks. To make matters worse there were deep divisions in French politics and the overthrow of the government in a military coup d'etat seemed a possibility at times.

In this climate it's not surprising that yachting was regarded as a minority activity. There were, anyway, few facilities for yachts except in places where foreign-owned boats came to visit. The idea of owning and sailing a yacht for pleasure would have seemed elitist, expensive, and impractical for the ordinary French man or woman.

If you sailed to any French harbour in the late 1950s or early '60s you would have seen no more than a handful of private yachts, most of them old and somewhat tatty. In Britain, yachting and offshore yacht racing was already booming, and British designers like Laurent Giles, Robert Clark, Peter Brett, Arthur Robb and C E Nicholson had become world famous for their robust and capable ocean racers and cruisers.

Then a Frenchman with a French boat won a famous French victory – and everything changed.

In 1964 Eric Tabarly with his remarkable ketch Pen Duick II (thanks to Remi Jouan for the above image) laid the foundations for the extraordinary boom in French yachting which has resulted, more than 40 years later, in France having a 37% share of the global market for sailing yachts, most of the world's biggest yacht building businesses, many of the world's most famous and successful yacht designers, a domestic leisure boat market of 8 million users - the second largest leisure boat market in the world after the USA - and a virtual monopoly on long-distance short-handed ocean racing superstars.

Eric Tabarly was a tough, handsome sailor, an officer in the French Navy, who was passionate about sailing and utterly determined to win the Singlehanded Transatlantic Race. Nowadays we think of “Le Transat” and other long distance races as French, but the original race in 1962 was an all-British idea, conceived by a British eccentric, Blondie Hasler, organised by the Royal Western Yacht Club, and sponsored by the Observer newspaper.

Francis Chichester had won the first race in 1960, and was favourite to win again. His yacht was a 40 foot Robert Clark ocean racer, solidly built and carrying a big cutter rig. Tabarly, an unknown in international yachting circles at the time, conceived a 44 foot purpose-built, light displacement ketch. She was built, simply but strongly in plywood with a double chined hull, and her rig was designed for power combined with good helm balance and ease of sail handling. However, no one had raced singlehanded in such a big boat before and most experts gave him little chance of finishing. 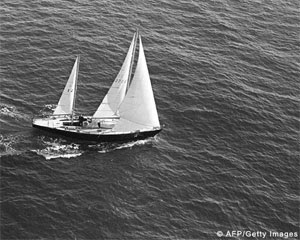 Tabarly stamped his authority on the race at an early stage. His determination to win was evident from the moment he launched an 900 sq ft spinnaker soon after the start (to the surprise of all who thought you needed a full crew for that kind of sail) and opened a huge lead over the rest of the fleet in the first couple of days.

He was handicapped by a number of gear failures. His self-steering gear jammed, forcing him to steer the boat by hand for many more hours than he had expected, his cheap alarm clock stopped working, making it difficult for him to keep to a sensible rest schedule, and his log rotor was bitten off by a dolphin. In mid-Atlantic his jib halyard block broke and he had to climb the mast to replace it. Nevertheless, Pen Duick II crossed the finishing line first in a record time of 27 days 3 hours, almost a full 3 days ahead of the pre-race favourite, Francis Chichester. Another Frenchman, Jean Lacombe finished in 9th place in his tiny GRP “Golif”. (More on this boat in a forthcoming post). (photo: Pen Duick II nears the finish line of the 1964 OSTAR: AFP/Getty Images)

France cheered the new hero. He was immediately awarded the Legion d'Honneur and returned home with Lacombe to a rapturous reception. Suddenly the French media and the French people took an unprecedented interest in yachting, new small yacht designs appeared from new French designers and new factories, money was found to build sailing schools and marinas, and France set a course towards domination of the European yachting industry.

In the next Observer Singlehanded Transatlantic race, in 1968, there were no less than 9 French entries, then 13 in 1972 and 31 in 1976. In 1984 out of the top 10 finishers, 8 were French. These days the “Transat”, as the race is now called, is dominated by French sailors, French boats, and French sponsors. 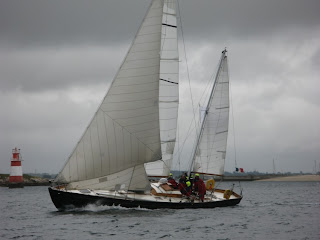 After the 1964 victory, Pen Duick had a busy and wearing life as an ocean racer taking part in many fully crewed races, during which Tabarly trained a formidable number of apprentices such as Alain Colas, Marc Pajot, Olivier de Kersauson, and others. These graduates of his informal sailing college became the next generation of great French ocean yachtsmen. Eventually Pen Duick was sold to the Ecole Nationale de la Voile at Quiberon, but after a short time, and a serious grounding, she was taken out of service and laid up ashore at the school gates. It wasn't until 1993 that a campaign to restore this famous boat was mounted, and with financial support from the government, the French Navy, the regional council of Brittany and others, she was restored to perfect condition. (colour photo above with permission of Remi Jouan)

Pen Duick II is now based at Quiberon and is used as a busy training vessel during the summer months and an occasional exhibit at the Cite de la Voile Eric Tabarly centre at Lorient in Brittany.