The Norske 35 design is a tough, double ended design very much in the style of Colin Archer and billed as an ocean cruiser by Harley Boats for construction in ferro cement. 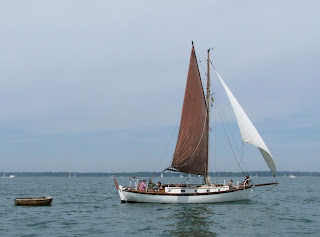 Dimensions are 35' LOD, beam of 11' and a relatively shallow draft of 5'3". Hartley describe her as "traditional relatively cheap and easy to construct craft, for general cruising or ocean wandering. The rig is easily within the limits of the loner." The sail plan shows either a gaff cutter or ketch rig. 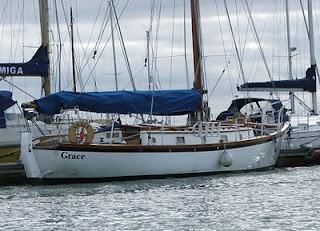 Windboats in Wroxham, Norfolk better known for construction of the Endurance 35, also built a number of Norske 35's using their "SeaCrete" method of ferro cement during the 1970's. Despite a poor reputation with insurer's, yacht surveyors and for resale value, there are a number of well built examples around which are doing well even after 30 odd years. 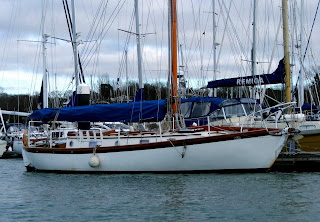 Grace is a Windboat built Norske she is normally based on the Hamble, but currently taking a sabbatical on the west coast of France.
Posted by Bursledon Blogger at 07:43