Up until the 1970's there was a ferry crossing connecting Southampton to Woolston over the Itchen river, the small village on the banks of the river became known as Itchen Ferry as did the inshore fishing boats which were built there in the later 19th century and fished the waters of the Solent. 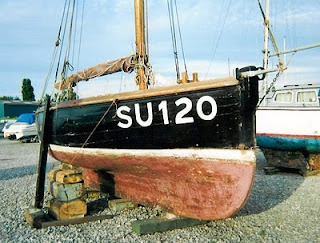 Typically transom stern gaff cutters of around 20 feet, characterised by a broad beam as much as eight feet. Despite their beam the boats had fair lines and were known for their speed and the ability to run straight in difficult sea conditions.
Several local boat builders were making this type of fishing boat around the 1850's and 1860's but perhaps the most famous was Dan Hatcher of which SU120 Wonder is a surviving example of his work. 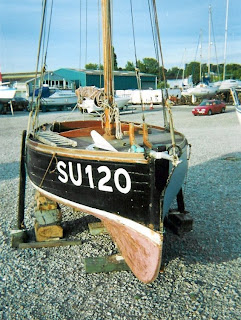 Several other builders including Luke, Alfred Payne, Stockham & Pickett and Fay's built boats of the type which probably more correctly should be called Solent Fishing Cutter's. A good few other examples survive to this day, although recognisable as an Itchen Ferry, this grey boat was spotted a long way from her home waters, in the east coast town of Woodbridge. 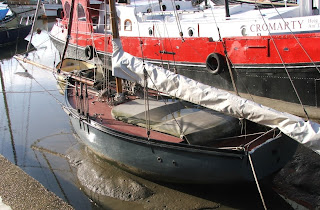