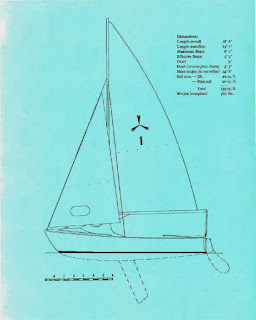 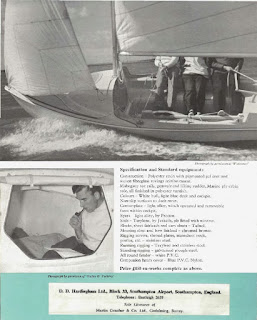 Tricorn's domed foredeck and short cabin roof enclose a cuddy with sitting space for 2 or 3 adults or sleeping space for 2 (in berths extending under the cockpit side benches). There would be just enough space left over in camping mode for a child of up to about 7 years old to stretch out. There's a large watertight locker aft, and two capacious cockpit side lockers, probably not really totally watertight in the event of capsize, but which resist rain, spray, and even a fair amount of solid water landing in the cockpit. 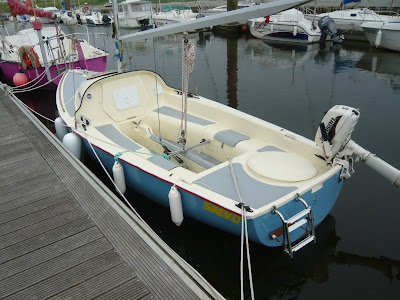 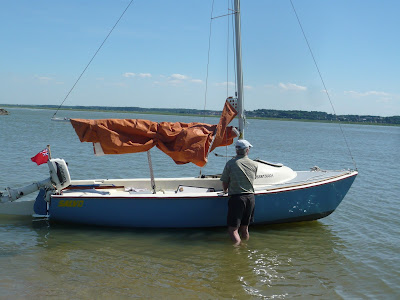 I made a new rudder blade cut from the plywood centreboard from an old Miracle dinghy, but it snapped in half in a fearsome tiderace in Brittany, so I have gone back to the original which I might reproduce in aluminium plate.

In spite of the age of the design, and these very minor shortcomings, I like my Tricorn.  She is a fine, strong, and capable boat - with a top class pedigree!
UPDATE

Her performance under sail is excellent.  She is faster and more weatherly than most serious cruising dinghies of similar size, even many well-known highly regarded modern designs.  Her fittings and gear are strong, sound and serviceable.  The rig is simple and, on dry land, the mast can be raised and lowered singlehanded.  The new sails are of the highest quality.

In very rough seas the closed-off cabin and self draining cockpit largely eliminate the risk of swamping.  The cockpit will free itself of water automatically within a couple of minutes while the boat sails on.  However, even in the unlikely event of a disastrous total flooding, Salvo’s hull contains enough buoyancy to remain afloat.

Salvo sails well under reefed sails.  In very severe conditions Salvo is capable of making safe harbour under sail with 3 reefs in the main and the small jib set, like a cutter’s staysail, well back from the stem head.

The draining cockpit enables the boat to be left unattended on a mooring indefinitely.

Cockpit lockers are lockable and weatherproof.  The outboard motor can be stowed out of sight and out of the way in the lazarette.

The electric outboard is powerful, ready for instant use without any starting problems, and has forward-neutral-reverse modes.

What are the weaker points?

Salvo’s cockpit drains let water in as well as out, so you often have wet feet.  Fitting new bailers that seal properly would probably solve this problem.

Cabin access is awkward through a small hatch.  It can be a tight squeeze for a person of average size, and requires flexibility and agility.  Once in, there is just enough space to shelter 2, maximum 3 persons, though, on the plus side, it is dry and warm and you don’t need a cockpit tent.

Pretty much like most other boats that don’t have a centreline outboard well, manoeuvring Salvo under outboard motor, transom-mounted on the starboard quarter, can be tricky.  The turning circle is large unless the plate is down, the rudder becomes ineffective at low speed, and the bows tend to blow off.  The outboard prop can come out of the water and lose traction if there is a man on the foredeck.

The Tricorn is initially a relatively “tippy” boat for its size.  Onboard you need to trim correctly and not jump about.  On the other hand, once sailing, she feels steadier and her generous freeboard means you would have to be very, very clumsy or very unlucky indeed to suffer a capsize.

Salvo is now equipped for sculling when necessary for brief harbour manoeuvres!