Details of this delightful yawl were sent by John Weiss, however the words were written by Harry Broady who commissioned the boat and owned her for 20 years.
John bought her from Harry a few years ago when he retired from sailing at the age of 86:

For those of you that are not familiar with Nord Vinden, she is a 13'-0" x 4'-6" Canoe Yawl, developed around the Victorian period as part of the Humber Canoe Yawls. Some of those were designed by George Holme. 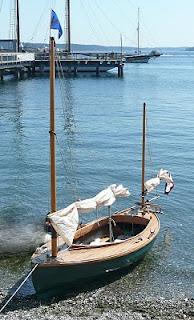 One evening some 20 years ago, (probably, a miserable evening weather-wise), I was reading the book "Sail and Oar" by John Leather. Fortunately I came upon the chapter describing George Holme's Ethel, and folks, that was all it took.

To shorten my story a little... I contacted William Clements Boat Builder who lives outside Boston Mass. We discussed the boat and other details and he accepted building Nord Vinden for me.

So we looked at the line drawing in the book, altered them a little to our liking and Bill made a 13-inch half-model resembling the boat. We agreed on the looks etc., and he continued developing, lofting, fairing the lines, building the molds and so on. 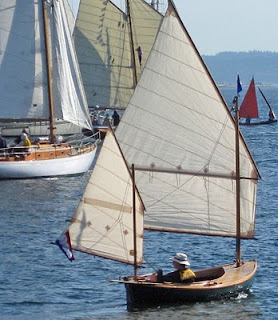 After about four months or so, Nord Vinden was ready for sea trials. From there on she has given me the greatest of pleasure every time I went sailing, whether there was no wind, little wind or a blustering wind. In addition, she rows well, and sculling is a joy. 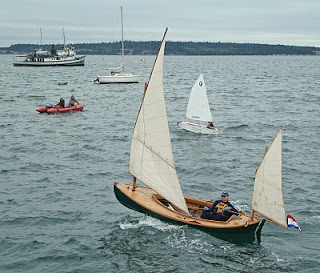 The particulars of the boat are as follows: 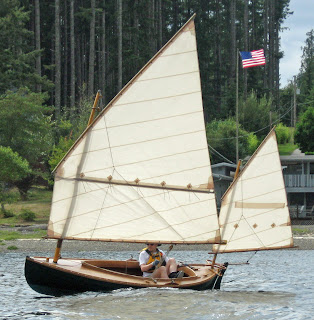 Her construction is of 6mm sapele mahogany plywood, epoxy coated. The hull is painted green above the waterline, and lighter green antifouling. The interior of the boat is epoxy coated and varnished. The deck is laid up strip with a covering board along the gunwale, all made from a Brazilian wood called Santa Maria, a pale light color. 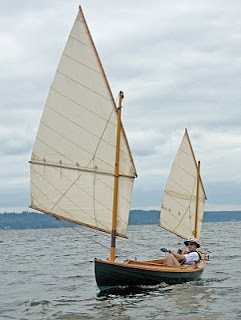 The mast and spars are of Sitka Spruce, and the sails were made by Sail Rite. The centerboard was manufactured by Springfield Fan Centerboard Co. and consists of five brass plates folding within each other from 7 1/2" to 18". 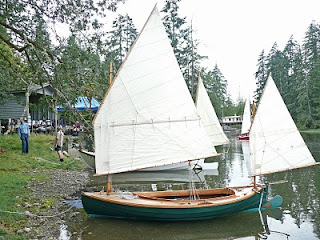 Thanks to John for a heart warming story of Harry and his (now your)lovely boat.
Posted by Bursledon Blogger at 22:23