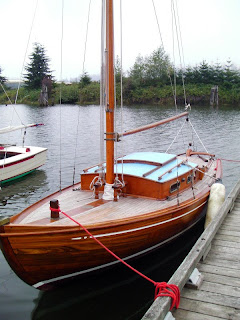 MaZu was the last Teak Lady built and was completed in February 1958 by Ah King Slipway in Hong Kong. Though she is a production boat, she looks and sails like a thoroughbred and sports the detailing of a petite yacht, built entirely of teak with durable bronze hardware.

The original Teak Lady was designed by Ted Kilkenny for his nephew in the mid-1930's and resembled the 23-foot San Francisco Bay Bear Boat but 6 feet shorter and proportionately heavier, with a deeper full keel and a taller rig. 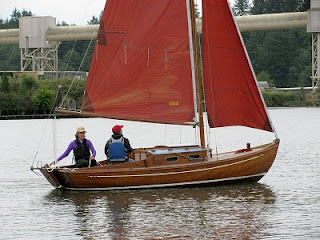 The Teak Lady proved herself so well against other Bay boats that soon outside orders were placed.
A brightly varnished Teak Lady was displayed at the 1937 World Expo/Fair on Treasure Island, and before the fair closed, fourteen new Teak Ladies were ordered. By 1940 the 17' 3" Teak Lady was an official San Francisco Bay racing class.

More fame came to the Teak Lady class in the 1940's. A young couple sailed from Monterey, California to Hawaii, then to the South Pacific, logging 8,000 nautical miles. At that time she was the smallest boat to cross the Pacific Ocean.


David Keenan, a former owner of MaZu sailed her in all kinds of weather in San Francisco and San Pablo Bays. He tells me that in one 55-knot winter gale, there was concern at the Vallejo Yacht Club when they noticed MaZu driving hard to weather with the ports submerged. But after noticing through the yacht club binoculars that both captain and crew were sporting ear to ear grins, they decided the rescue party could be called off. 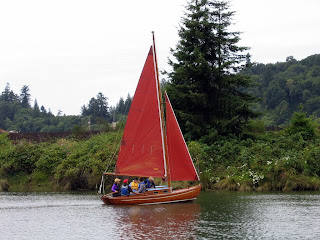 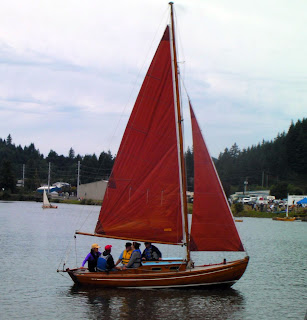 MaZu is currently moored on the northwest coast of the US, in Toledo, Oregon. She sports her colors at local boat shows where families line up for free sailing lessons.
Posted by doryman at 08:01