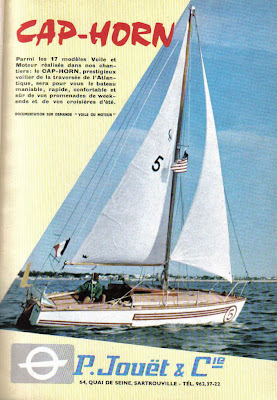 When stories are told about the early days of short and single-handed long distance ocean racing, the names of Chichester, Hasler and the French hero Eric Tabarly are the most easily remembered. It's often forgotten that only one Frenchman took part in the first Observer Singlehanded Transatlantic race - and it wasn't Tabarly.

The lone Frenchman, Jean Lacombe, sailing the smallest boat in the race, the tiny plywood “Cap-Horn,” was, in fact, probably already the most experienced single hander among the 5 men who took part in the first OSTAR. Although up against more famous adventurers like Francis Chichester and Blondie Hasler, by the time the race started Lacombe had already sailed the Atlantic single-handed from East to West and back again, as well as cruising a great deal of the Eastern seaboard of the USA. He had done all this in his simple 21 ft centreboarder, Cap-Horn, designed by J-J. Herbulot as a low cost weekend cruiser.
(photo: Jean Lacombe's Cap-Horn after the 1960 OSTAR - still with race number - Jouet Cap Horn brochure)
Lacombe had actually been in New York with his boat when he heard of the race. He entered late and set sail for for the start line 3000 miles away at Plymouth to arrive 4 days after the others had departed. His participation went, therefore, almost unnoticed by the British and foreign press who had been in Plymouth covering the race preparations but had already left the scene.
Staying only long enough to fill his water tanks and buy a few provisions for the return voyage, Lacombe calmly set sail into the prevailing wind for another 3000 mile Atlantic crossing. 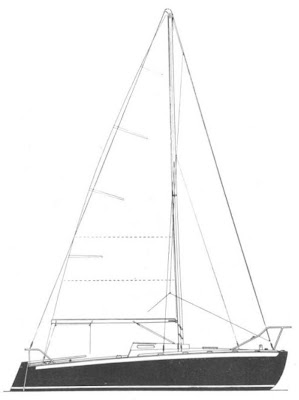 Lacombe's “Cap-Horn” was a compact weekend family cruiser of 21ft overall, built by Jouet, a well established boat building firm in Sartrouville, on the River Seine. It was a design that, though simple, was rather more sophisticated than the type of basic small cruising boat that was becoming popular in France in the 1950s, when the influential Glenans Sailing School began to turn out a few dozen enthusiastic young sailors every summer.
The yacht's designer, Jean Jacques Herbulot, had designed most of the Glenans school boats, so this new breed of French sailor was already programmed by training and experience to appreciate the simple rather “boxy” plywood hulls he had produced previously. The Cap-Horn, however, was not hard-chine ply-over-frame construction like most of his earlier boats. It had a nicely rounded cold moulded hull, though it retained the typically Herbulot wide, clear decks and minimal raised coachroof. The Cap-Horn is now quite a rare boat, and it's difficult to find much information about it, but, at the time it must have seemed a more sophisticated design than most others in its class. 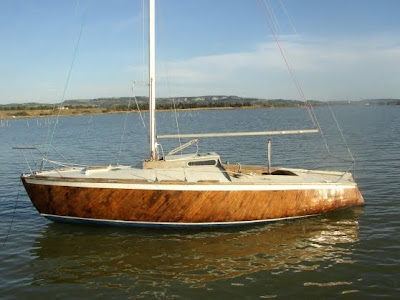 The plywood Herbulot designs of the day, simple, compact, practical and inexpensive, were emblematic of French sailing in the '50s and early '60s. Just a year after the first OSTAR, however, France's first all-GRP production cruising boat emerged from the Jouet factory, and Cap-Horn's strong and lightweight cold moulded construction suddenly seemed old fashioned and labour intensive compared with the new high-tech material. (colour photo: the varnished hull of this 1964 Cap-Horn, recently for sale in France, has been well maintained and preserved.)
Jean Lacombe did complete that first OSTAR, finishing in last position after 74 days. He went on to take part again in the 1964 race (Tabarly's first win) in another Jouet-built boat, the Golif, a landmark (seamark?) design in French yachting history which I'll write about in another post soon 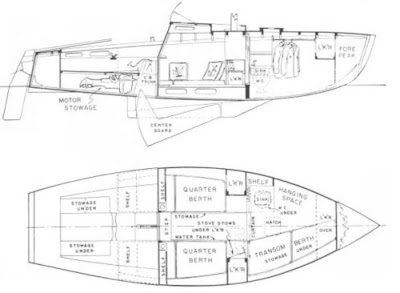 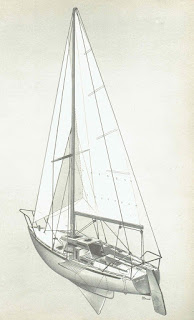 A comment on this post by “floridafred” suggests that Lacombe’s original transatlantic race boat might be in dry storage in St. Augustine, Florida, USA.  This boat may have been renamed YAVASH at some time.

A French journalist and yachting historian, Eric Vibart, who writes for VOILES ET VOILIERS magazine, has assembled a great deal of archive material on the life and voyages of Jean Lacombe and would dearly like to discover the whereabouts of this historic boat.  If you have any information that might be helpful, or if you know how to contact “floridafred” please get in touch with Eric Vibart.

Any information could be send to Eric Vibart : evibart@club-internet.fr