Thanks to Keith Clark for words and pictures about Crunluath his Honey Bee class sloop. 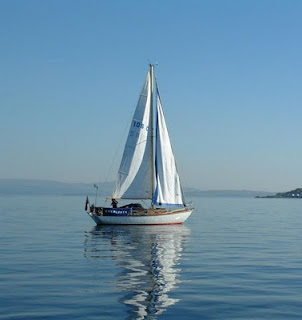 Crunluath is a Honey Bee class sloop traditionally built with mahogany planks on oak frames by William Boag and Sons at Largs the Clyde in 1965.

The class design dates from 1958 and boats were built in Scotland by a few builders, then later more in East Germany. These latter boats were strip planked and had laid teak decks. At least two other boats were built in the 1960's by Dixon Kerley at Maldon and were a slight variation on the original design with a five berth layout and were described as Queen Bees.

The overall length is 27ft 6ins, give or take a few eighths, these were hand built boats and each is slightly different! Beam is a slender, by modern standards, 8ft., draught with an iron keel is 5ft 2ins. The original design showed a fractional rig with a keel stepped mast but all the boats I know of have a masthead rig and most have deck stepped masts. 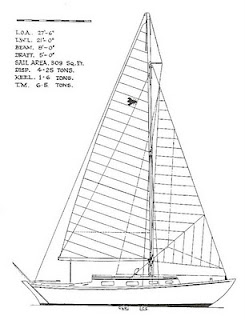 They were designed by R.A.Balfour, a scottish trained naval architect, and came about as a result of a competition to design a boat suitable for a family of four to sail the west coast of Scotland. Balfour's design was the second prize winner in the competition but as far as I know the winner, designed by the well known Alan Buchanan never gained popularity.

In many ways they were a boat behind the times, designed in the 1950's and built just before grp got a grip on the boat building scene. When costs became prohibitive in the 1960's boats were imported from East Germany. About twenty boats are known to exist, or have existed, please contact Keith's Honey Bee website if you know of any others. 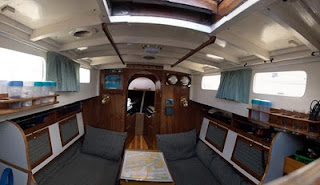 Not fast by modern standards they nevertheless sail well, especially to windward and are very well behaved except, like all long keeled sailing boats, when it comes to close quarters manoeuvres; they are a liabilty in a marina! Once into open water they cope with anything the sea throws at them. Accommodation is cosy, nominally four or even five berths, a galley and heads compartment so you have to be good friends with fellow crew members. Early petrol engines have been replaced by more modern diesels of course but apart from some metal spars and modern sails they look much the same now as they did when first built, very much a traditional british family yacht.
Posted by Bursledon Blogger at 18:16