These Essex boats fished from the rivers Blackwater, Colne, Crouch and Orwell, north of the Thames estuary. The Smack was a gaff cutter and although built to a variety of types and sizes, they were noted for their sea worthiness, wind ward ability and speed.

During the 19th century the Essesx Smacks fell into three groups ranging from small inshore and estuary smacks of 12 tons right up to the 50 foot deep sea smacks which would fish as far afield as the Baltic and France. 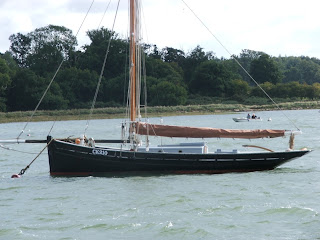 Almost all the small villages along the east coast rivers had their own fleet many concentrating on a certain fishery. A hundred years ago the wharfs and river frontage of Brightlingsea, Rowhenge, West Mersea, Bradwell, Madon, Wivenhoe, Tollesbury, plus a few others I've forgotten, would be bustling with local smacks, each village could be home to as many as fifty boats.

I don't have nearly enough photographs to do justice to these legendary boats, so please enjoy the Smacks in this video by Dylan Winter with music by Cocker Freeman, who's genuine Dengie (Essex) accent and somewhat dubious lyrics are well worth seeing