Peter Duck' is a character in one of Arthur Ransome's famous children’s novels, in later life he commissioned Jack Laurence Giles to design a comfortable cruising ketch which was named after the character. The design was commissioned just after the war in 1945, built by Kings of Pin Mill in Suffolk she was completed in 1947 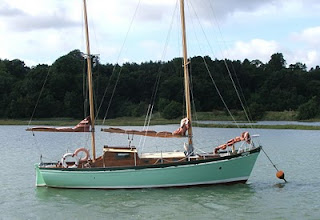 Ransome is alleged to have requested “a sort of marine bath-chair, a minimum of work to sail and yet provide the maximum comfort for two.” Whether Laurence Giles succeeded is not clear, but for whatever reason Ransome didn’t take to Peter Duck and sold her after only 3 years in 1950. 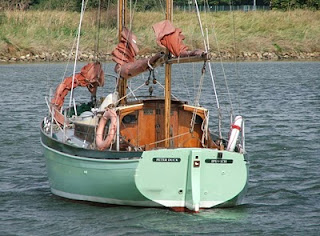 Although not a production boat, over 40 of these ketches were built. LOA is 28 feet 3inches long with a draught of 3 feet 6 inches and a beam of 9 feet. The original boat was fitted with a Stuart Turner engine. The detailed fit out of each is varied, but the overall design is recognised for its passage making ability even in heavy weather. The easily handled ketch rig made the boat popular with single hander sailors.
The original Peter Duck still survives, indeed flourishes under family ownership who have been custodians for much of the past 50 years.