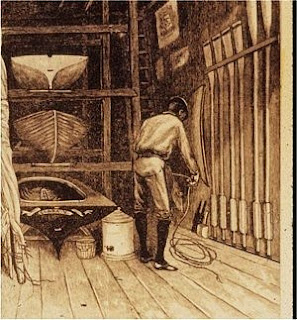 The Delaware River, on the Atlantic coast of the United States, was first mapped by a Dutch expedition led by Henry Hudson in 1609. Today it is known as a major shipping channel supplying New York and New Jersey, but at one time it was a pristine paradise and many small boats were developed in this area for hunting and fishing.

These old shallow draft, low freeboard designs proved to be very competitive sailing vessels when some brave soul decided to experiment with how much canvas they could carry.

The boats were called Hikers because ballast was crew weight and not actual ballast in sand bags. The Delaware River is relatively narrow, and in a race upwind with frequent short tacks, it wasn’t possible to shift bags often enough. Thus, the crew was required to hike way out to keep the boats upright.

Tuckups were the smallest of the classes, and their name was derived from the shape of the stern, which tucked up into a very pretty shape with a delicate twist of the planking.

Andy Wolfe, Secretary of the Traditional Small Craft Association and a resident of Buena Vista, Virginia has this to say about his favorite boat:

The attached photo is a Tuckup, class 4 hiker that I restored about 15 years ago and is now owned by the Delaware River Chapter of the TSCA. It was probably my all time favorite sailing machine. Designed in 1876, it was one of the most popular club racing designs in the Philadelphia area. All but a few of these boats were destroyed in a single wharf fire. I believe there are 8 still sailing that were built at the Philadelphia Maritime Museum and Mystic Seaport. 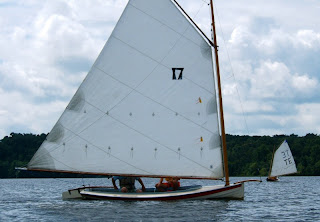 The Tuckup is a fifteen foot gaff rigged catboat made of cedar planking on oak or locust frames.
Posted by doryman at 06:00