Roger Rodibaugh of Lafayette, Indiana kindly sent us pictures of his delightful Melon Seed skiff Nancy Lee named after Roger's wife. The Mellon Seed has been a favourite ever since I first discovered the lines in Howard Chappelle's book American Small Craft. 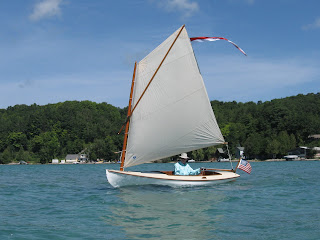 Roger tells the story - In the 1880s, in the bays and backwaters of New Jersey (USA), there developed a shapely gunning skiff called a Melon Seed. H.I. Chapelle imortalized the type in his American Small Sailing Craft. He and other historians suggest that the Melon Seed was a developmental improvement on the Sneakbox, better able to handle the open, choppy waters of the Jersey Bays by virtue of its more complex shape. Others argue that the Sneakbox, being easier to build, and therefore less costly, came after the Melon Seed. Whichever the case, it remains indisputable that this little skiff is a right virtuous craft, suitable today for easy singlehanding or a crew of two and a picnic. 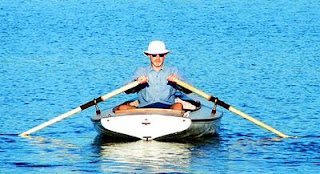 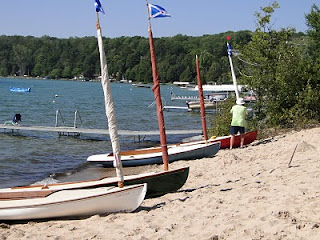 Roger Crawford builds a version of the Chapelle skiff in fiberglass and teak in his two-man shop. Largely thanks to him and the over 450 boats he has built, the type has become more widely known. http://www.melonseed.com/ There are also a number of professional and amateur builders who have built carvel, plywood lapstrake, and strip plank boats to various plans. 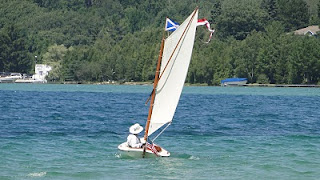 I have sailed a Crawford Melonseed for nearly 20 years and can attest to her virtues. I live 50 miles from my sailing waters, so easy trailering and quick rigging are important to me. The 235 pound boat is effortless to trailer, and the sprit rig sets up instantly. She relishes a breeze, but takes well to the oars in a calm. Her diminutive size belies her toughness -- she's very capable, and seems to know just how to step through a chop -- and the side decks keep the green water out. All this, and pretty, too, with her hollow bow and saucy sheer. 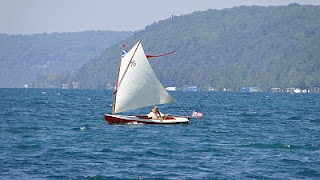