Misty Moonbeam a unique yacht which was designed and built by the late Michael Corbin.
For many years Misty Moonbeam was a familiar sight on the Medina River in Cowes. 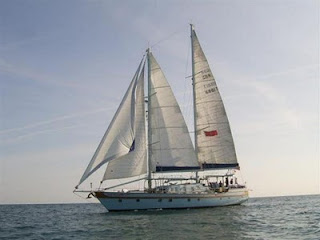 A previous owner writes "If you would like to see more of the interior of Misty Moonbeam - here's the link to an Album created April 2010 - which can be viewed page by page without purchase. This was where she was berthed under her new ownership from 2007 to 2010 Chivenor, near Barnstable at the time. It was a pity the tide was out - but you can't have everything, it was a beautiful day. I was fortunate enough to be invited to spend a day on board, with a photographer friend who created the Album. That's me on board in red"

"Misty Moonbeam was sold in 2007 and indeed has been recently sold on again. I would also refer you to a YACHT MARKET site, where Misty was advertised prior to the latter sale. This gives all her statistics and will give you a true figure of the amount of winches on board. This site will be undoubtedly removed soon as she is under new ownership as at October 2010."

"If you remember, she was originally a Wishbone Schooner - but the first buyer didn't know how to make use of the wishbone, whereby it was removed, re-rigged with a complete new set of sails."

"Here is the one and only picture of Misty Moonbeam under sail in the beauty of her original rig for which Mike had designed her It is not easy to get a photo of your own boat under sail - unless you are racing and surrounded by press photographers. Fortunately I alerted some friends she was in the West Country, and the rest is history. That's Mike on the raised poop - with daughter and son-in-law on deck." 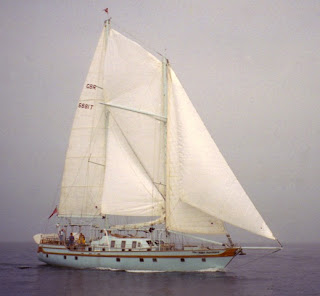 "May Misty Moonbeam continue to sail the seas. She was designed for world cruising and may she be admired the world over and live on in the memories of all who appreciate her individual beauty."
Posted by Bursledon Blogger at 06:46